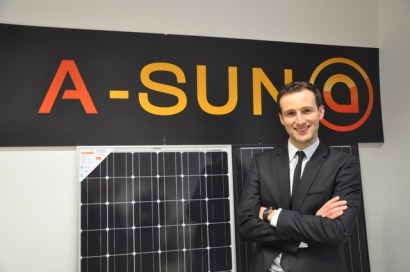 A-SUN is the photovoltaic (PV) branch of green solutions multinational Aton Energy Ltd. A-SUN designs, manufactures and distributes a range of reliable and competitive solar energy solutions. Its ISO-certified factory produces reliable and high-efficiency PV products which are MCS, CE, TUV, IEC and UL certified, each of which is delivered with a manufacturer warranty of 10 years and 25 years on efficiency, and backed up by a European Insurance company. The company also provide a wide range of green solutions, including inverters and mounting systems.

As well as having an extensive sales network, A-SUN has local offices in France, the United Kingdom, Italy, Turkey, Poland and Germany, as well as a regional headquarters in Hong Kong. In 2011, the company plans to open new offices in the United States, India and South America.

In February, A-SUN and its technical partner, the solar installer Solar SW commissioned what the company describes as “the largest PV system commissioned in England, since the feed-in tariffs (FiT) started in April 2010”. The 1.16-MW array is being erected in Somerset in the south west of England and will have an estimated output of estimated 1,125,000kWh per annum, saving 550 tonnes of carbon each year. A significant proportion of the power generated will be used on site, with the remainder being injected into the grid.

Due to its size, A-SUN believes this project represents “a massive input to the PV industry and a very interesting case study”. We find out why in this exclusive interview with Nicholas Martin, Sales Manager, who also discusses the growing solar PV market in the UK and elsewhere.

Nicholas Martin is Managing Director UK of A-SUN Energy. He was working in the UK solar PV industry before the FiT scheme started and prior to A-SUN, he worked as International Sales Manager for an industrial manufacturer of renewable solutions.

When did A-SUN enter the UK market and why?

A-SUN approached the UK market around a year ago, just before the feed-in tariff (FiT) started. We saw a big opportunity, thanks to an efficient FiT policy in negotiation and a huge gap to be filled for the country in terms of solar PV technology.

Could you describe the makeup of the PV market in the UK at present? Where are the main markets geographically? What is the main type and size of arrays being installed (rooftop, ground-based) and why?

The market is not yet structured in comparison with Germany or France. There are a few important distribution companies that were previously specialised in wind turbines, distributing to a wide number of installers or electrical contractors, mainly acting in their local area.

The PV industry was called a “cottage industry”, comprising a large number of small companies spread around the country. The South is best for PV installation of course in terms of radiation, but surprisingly the North is also very active, thanks to “solar for free” companies.

The main market is the domestic market, mainly rooftop arrays from 1.2kW up to 4kW, because these systems offer a good ROI. A large market share is taken up by “solar for free” companies and by tenders for social housing or new builds.

Until the recent announcement from the Government of a review of the FiTs, there was huge potential for commercial and large-scale projects. However, the new level of FiTs resulting from the current consultation for installations larger than 50kW means there will not be any more opportunities unfortunately.

We believe that the domestic market will become very competitive and a number of foreign developers or commercial specialists will leave the country, as they are struggling to bring in their know-how and are not creating the jobs we were all expecting, not even a year after the tariffs were introduced.

Your company claims to have built the largest PV array so far in the UK. Do you have plans to build more major PV systems in the region?

We have already commenced another large-scale project, of a similar size and conditions [to the Somerset array]. Alongside our partners, our aim is to operate locally close to our clients, and to support the development of our green technologies at the scale required by the market. Our company’s vision respects the essence of the FiTs; it makes sense for owners to generate their own electricity or use it locally. The new cap of 50kW is too low to see new similar installations being rolled out or to create interest for companies.

While ground-based arrays have been all the rage in Spain, it appears the UK is more reticent about locating PV systems on the ground. Is this to do with stricter planning regulations and space restrictions in the UK?

The Government said they want to preserve the UK countryside by restricting the number of ground-based installations. However, as we are able to show, for specific projects we are currently developing on farms or for land owners, these arrays do not alter the landscape at all, and planning institutions have been very collaborative. Nonetheless, we do recommend to our clients that they use their roof spaces, if they are in good conditions.

Again in Spain, PV companies have started “leasing” roof space off building owners in order to develop PV arrays and claim the FiT. Is this also happening in the UK?

Yes. Although the regulation is slightly different from what we experienced in other countries, the UK market is very proactive, and is already offering competitive packages as well as a variety of financial options. At A-SUN, we are also offering financing options to our clients for commercial and agricultural installations.

Some companies such as Homesun are installing PV arrays for free on people’s homes in the UK in return for lower electricity bills, with these companies pocketing the FiT. Do you believe this is a good business model?

What is the aim of the FiTs? To create green electricity as close as possible to consumers’ needs. Considering the significant cost of an installation, it makes sense for some people to sign up with companies like Homesun or A Shade Greener. I think the business model is good, but requires an accurate mechanism. On the other end, if you can afford a system, go for it on your own: you will make more profits as the cost of installation on the market is becoming very competitive. Since we marketed our full kits at a competitive price, we have had huge success.

Do you believe the MCS* is positive for the sector? Would you change the scheme in any way?

The technical specifications required by the MCS are beneficial for the end consumer and even for an installer company starting out in PV. It gives them reliability on the due diligence. As long as you respect the current European certifications, you will very easily be eligible for MCS accreditation.

As you mentioned beforehand, the UK government recently announced that it plans to review the FiT scheme one year ahead of schedule, to which the European Photovoltaic Industry Association has responded by urging the UK government to take all the necessary caution to let the market deploy and avoid destabilizing many British communities and companies which are starting to invest. Are you concerned about the news?

Of course! When we started out in the United Kingdom a year ago, we were very optimistic about the way the market was structuring and evolving. The interest from farmers and communities was fantastic. We appreciate the reasons given by the Government under the current economic circumstances, but this review will not help the country to become competitive, and we believe the review will have a strong economic impact and also on job creation. The FiT reductions will also considerably hinder the progress of the market, and it will make it difficult to achieve the target set by the Government to generate 20% of energy using renewable sources by 2020.

What would you say to someone considering investing in PV in the UK in light of this recent announcement and the cuts to FiTs in Germany, Spain, etc.?

I would say, go for it! Nobody can deny that renewable energies are very important for our future; we have to change our way of consuming energy to preserve our planet. PV has always been seen as a lucrative investment, but also as the simplest way to start being green. PV is proven as a safe and long-term investment, and the easiest way to start changing our carbon footprint.

How do you think the global PV market will adjust to this raft of FiT cuts? Is the industry now mature enough to survive without them?

The PV industry has made huge efforts to support the green trend encouraged by FiT, but has suffer too many times from “stop-and-go” policies. This lack of stability hurts a lot of companies and a large number of projects. And, as we have still not achieved the targets set by governments when implementing the FiTs, there is still a lot to do, but we still need the support from government.

In this regard, when do you believe grid parity will be reached for solar PV electricity?

According to our internal surveys, and what we’ve heard from established PV associations, grid parity could be reached realistically within five to eight years. Although in some countries, grid parity for residential systems could be possible sooner. According to the EPIA, in some specific cases in countries or regions with very high electricity prices, PV could already soon become competitive with net-metering alone.

Finally, A-Sun plans to open an office in South America this year. Which emerging PV markets are attracting your company’s attention at the moment and why?

Non-European countries represent massive potential in the coming years, with only 20% of the global market today. We are already extending our network to be able to take our experience and our services into promising markets. We want to become a global company and a major player in the renewables industry by bringing innovative, high quality and competitive solutions to our clients worldwide.