Monday, 22 June 2015
0
Robin Whitlock
Bombora Wave Power has signed a Technology Evaluation Agreement with Indonesian company Anoa Power in advance of a manufacturing and distribution arrangement for the supply of its Wave Energy Collector (WEC). 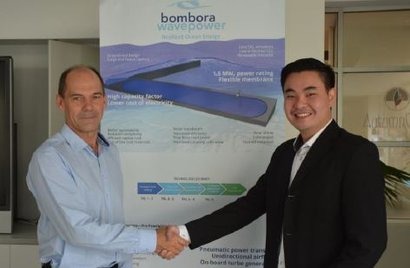 The Indonesian archipelago is facing extensive challenges with its complex power network and the deployment of the Bombora WEC would greatly improve access to electrical power for Indonesian citizens. The country’s present wave energy resource level is somewhat less than that currently available to other countries and the WEC is very attractive to the Indonesian market, on account of its ability to collect wave energy from a wide wave front.

The WEC’s flexible membrane and simple valving, squeezes air through a closed circuit and extracts energy with an air turbine to generate electricity. Rated at 1.5 MW, each unit may have the potential to supply renewable electricity for 500 homes or deliver 1GL of desalinated water each year, comparable to the equivalent greenhouse gas benefit of taking approximately 825 cars off the road.

The WEC also helps to reduce the cost of wave energy, is resistant to storms and has a low environmental impact. The low cost arises from its simplified construction, consisting of a concrete base with a sloping membrane wall. This allows the WEC to be lengthened in low wave energy resource regions at a low incremental cost. Its resting position on the sea floor allows large waves to pass over the top of the device with minimal interruption while the membrane can also be deflated in stormy conditions. These features protect the WEC from the damaging effect of large or rogue waves. Storm resistance has been a significant challenge for wave energy device developers thus far. Bombora’s WEC also has minimal impact on coastal utilisation.

Under the agreement signed by the two companies, Anoa Power will evaluate suitable deployment sites while Bombora will confirm electricity generation capability across these same locations.

Bombora Wave Power was established in 2011 and is a 100 percent Australian private company based in Perth. The company has previously won an international GE Ecomagination Challenge 2013 award for its WEC and the company was also a semi-finalist in the Australian Clean Technology Competition 2013 and a finalist in the WA Innovator of the Year Award.