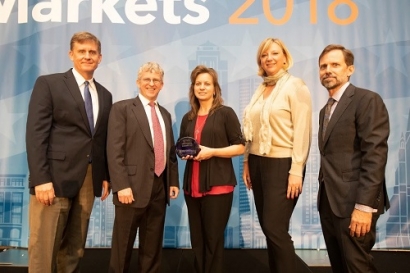 Anheuser-Busch was honored for its continued efforts to increase efficiency and reduce its carbon footprint. Earlier this year, the company committed to sourcing 100 percent of all purchased electricity from renewable resources by 2025 as a part of its ambitious 2025 U.S. Sustainability Goals.

“Sustainability is fundamental to the way we operate. It is not just part of our business, but it is our business,” said Ingrid De Ryck, VP of Procurement and Sustainability at Anheuser-Busch. “We strive to build a better world across all areas of our business and throughout our value chain, and are thrilled to have these efforts recognized by the EPA as part of their nationwide Green Power Leadership Awards.”

Thanks to a wind energy purchase power agreement with Enel Green Power, Anheuser-Busch currently purchases enough green power to meet over 50 percent of its electricity needs annually — an amount equal to the electricity use of more than 67,000 average American homes, or more than the electricity used to brew Budweiser in the U.S. each year. The brewer ranks fifteenth on the EPA’s National Top 100 Partners list, which highlights EPA Green Power Partners using the most renewable energy annually as of July 2018.

“We are more than halfway to achieving our 2025 Goal of securing 100 percent of purchased electricity from renewable sources,” said De Ryck.

The winners for each of the three award categories are:

Green Power Partner of the Year

Excellence in Green Power Use

The Green Power Leadership Awards are sponsored by EPA’s Green Power Partnership Program in collaboration with the Center for Resource Solutions.