Monday, 12 December 2011
0
Toby Price
Officials at the Durban UN Climate Change Conference (COP17) have said that countries attending the eleven-day event in South Africa have delivered a breakthrough on the future of the international community's response to climate change. However, others are less upbeat, such as the Global Wind Energy Association which has warned that the commitments reached could be “too little, too late”. 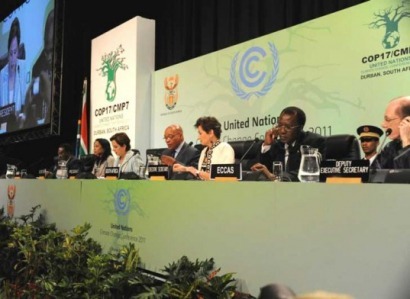 In Durban this weekend, governments decided to adopt a universal legal agreement on climate change as soon as possible, but not later than 2015. Work will begin on this immediately under a new group called the Ad Hoc Working Group on the Durban Platform for Enhanced Action.

"We have taken crucial steps forward for the common good and the global citizenry today. I believe that what we have achieved in Durban will play a central role in saving tomorrow, today," said Maite Nkoana-Mashabane, South African Minister of International Relations and Cooperation and President of the Durban UN Climate Change Conference (COP17/CMP7).

Governments, including 35 industrialised countries, agreed a second commitment period of the Kyoto Protocol from 1 January 2013. To achieve rapid clarity, Parties to this second period will turn their economy-wide targets into quantified emission limitation or reduction objectives and submit them for review by 1 May 2012.

"This is highly significant because the Kyoto Protocol's accounting rules, mechanisms and markets all remain in action as effective tools to leverage global climate action and as models to inform future agreements," said Christiana Figueres, Executive Secretary of the United Nations Framework Convention on Climate Change (UNFCCC), who said the countries who made this agreement had “all laid aside some cherished objectives of their own to meet a common purpose - a long-term solution to climate change”.

A significantly advanced framework for the reporting of emission reductions for both developed and developing countries was also agreed, taking into consideration the common but differentiated responsibilities of different countries.

In addition to charting the way forward on reducing greenhouse gases in the global context, governments meeting in South Africa agreed the full implementation of the package to support developing nations, agreed last year in Cancun (Mexico).

"This means that urgent support for the developing world, especially for the poorest and most vulnerable to adapt to climate change, will also be launched on time," said Ms Figueres.

The package includes the Green Climate Fund, an Adaptation Committee designed to improve the coordination of adaptation actions on a global scale, and a Technology Mechanism, which are to become fully operational in 2012. Whilst pledging to make progress in a number of areas, governments acknowledged the urgent concern that the current sum of pledges to cut emissions both from developed and developing countries is not high enough to keep the global average temperature rise below two degrees Celsius.

They therefore decided that the UN Climate Change process shall increase ambition to act and will be led by the climate science in the IPCC's Fifth Assessment Report and the global Review from 2013-2015.

"While it is clear that these deadlines must be met, countries, citizens and businesses who have been behind the rising global wave of climate action can now push ahead confidently, knowing that Durban has lit up a broader highway to a low-emission, climate resilient future," said the UNFCCC Executive Secretary. The next major UNFCCC Climate Change Conference, COP 18/ CMP 8, is to take place 26 November to 7 December 2012 in Qatar, in close cooperation with the Republic of Korea.

While most welcome the fact that progress has been made in Durban, some are concerned it may not be enough, and that the COP 17 slogan "Saving tomorrow today", may actually not stand true after the conference. The Global Wind Energy Council for example warned today that both the level of ambition and the speed of the negotiations needed to increase dramatically to meet the challenge of global climate change.

“Yesterday’s agreement was a victory for multilateralism and the climate process”, said GWEC Secretary General Steve Sawyer. “Let’s see if we can gather enough political will in the next few years to make it the victory for the climate that the public demands and our children deserve.”

As explained above, the agreements in Durban provide for a second commitment period of the Kyoto Protocol after 2012, and established a process to come up with a Protocol or another form of legal agreement by 2015, which would enter into force by 2020. But perhaps the most important part of the agreement is the ‘review’ of the science in the context of the IPCC’s 5th Assessment Report which Parties agreed should guide the level of ambition of the new agreements.

“At some point, diplomacy and short term national interests must come face to face with the facts”, continued Sawyer. “Action which does not begin until after 2020 will be too little too late, and we will lock in 3°C or more of temperature rise, with disastrous economic, social and human consequences.”

“We live to fight another day. But the margin of error from here on out is very slim, and if we don’t speed up the process and raise our level of ambition, we will leave our children an extremely unpleasant legacy,” concluded Sawyer.