Thursday, 04 December 2014
0
Dan McCue
The Middle East Solar Industry Association announced the winners of its annual solar awards at a gala ceremony held at the Emirates Towers Hotel in Dubai on Monday night. 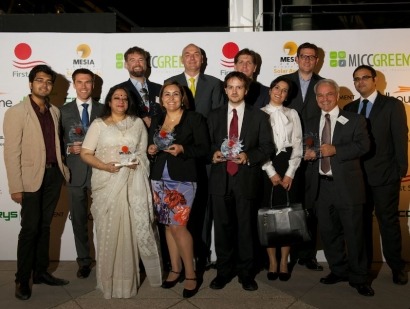 The award ceremony, at which 12 winners were honored, was held in conjunction with the 3rd Annual MENA Clean Energy Forum hosted by the Clean Energy Business Council.

In all, more than 200 dignitaries attended the event. The award winners, representing five different countries, were chosen by an independent panel of judges from around the world.

This year's awards were particularly notable due to the large number of women honored.

The Woman of the Year accolade went to Michelle Davies, Head of the Clean Energy and Sustainability Group at Eversheds. She was honored for her support of governments in the UAE, Jordan and Saudi Arabia on forming solar policy and regulation.

Eversheds also received the Legal Advisor of the Year award.

Another female winner was Lamyaa Abdel Hady, director of the solar FIT Program at Egypt's Ministry of Electricity, who received the Solar Initiative of the Year.

Robin Mills, a columnist for The National newspaper and author of "The Myth of the Oil Crisis and Capturing Carbon," received the Media Personality of the Year award.

Dubai-based Enerwhere won the Project of the Year award.

UAE-based Access, which has been particularly active in developing sustainable energy projects in Africa, received the Regional Company of the Year award.

Jordan’s NEPCO was honored as the Utility Company of Year.

Mesia also recognized the late  Jit Chakravarty of Alsa Solar Systems with a special Lifetime Achievement Award for his dedication to the Solar Industry.