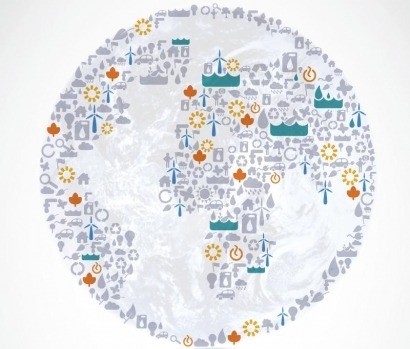 A new report was commissioned by the Renewable Energy Network (REN21) and produced in collaboration with a global network of research partners shows that in 2010, renewable energy supplied an estimated 16% of global final energy consumption and delivered close to 20% of global electricity. Renewable capacity now comprises about a quarter of total global power-generating capacity.

Global solar PV production and markets more than doubled in comparison with 2009, thanks to government incentive programmes and the continued fall in PV module prices. Germany installed more PV in 2010 than the entire world added in 2009. PV markets in Japan and the U.S. almost doubled relative to 2009.

Globally, wind power added the most new capacity (followed by hydropower and solar PV), but for the first time ever, Europe added more PV than wind capacity.

Renewable energy policies continue to be the main driver behind renewable energy growth. By early 2011, at least 119 countries had some type of policy target or renewable support policy at the national level, more than doubling from 55 countries in early 2005. More than half of these countries are in the developing world.

At least 95 countries now have some type of policy to support renewable power generation. Of all the policies employed by governments, feed-in tariffs remain the most common.

Investments up a third

Money invested in renewable energy companies, and in utility-scale generation and biofuel projects increased to $143 billion, with developing countries surpassing developed economies for the first time, as shown in the GSR’s recently released companion report, UNEP Global Trends in Renewable Energy Investment 2011. China attracted $48.5 billion, or more than a third of the global total, but other developing countries also experienced major developments in terms of policies, investments, market trends, and manufacturing.

Beyond Asia, significant advances are also seen in many Latin American countries, and at least 20 countries in the Middle East, North Africa, and sub-Saharan Africa have active renewable energy markets, the report says.

Developed countries still led the way in investment in small-scale power projects and R&D during 2010. Germany, Italy and the US were the top three.

• Renewable capacity now comprises about a quarter of total global power-generating capacity and supplies close to 20% of global electricity, with most of this provided by hydropower.

• Developing countries (collectively) have more than half of global renewable energy power.

• Solar PV capacity was added in more than 100 countries.

• In the United States, 30 states (plus Washington, D.C.) have Renewable Portfolio Standards (RPS).

• China led the world in the installation of wind turbines and solar thermal systems and was the top hydropower producer in 2010. The country added an estimated 29 GW of grid-connected renewable capacity, for a total of 252 GW, an increase of 13% compared with 2009.

• Renewables accounted for about 26% of China’s total installed electric capacity in 2010, 18% of generation, and more than 9% of final energy supply.

• Brazil produces virtually all of the world’s sugar-derived ethanol, and has been adding new hydropower, biomass and wind power plants, as well as solar heating systems.

• In the European Union, renewables represented an estimated 41% of newly installed electric capacity. While this share was significantly lower than the more than 60% of new capacity in 2009, more renewable power capacity was added in Europe than ever before.

• The EU exceeded all its 2010 targets for wind, solar PV, concentrating solar thermal power, and heating/heat pumps. Countries including Finland, Germany, Spain, and Taiwan raised their targets, and South Africa, Guatemala, and India, among others, introduced new ones.

“Good news for the economy”

Reacting to the new report by REN21, Sven Teske, Renewable Energy Expert for Greenpeace International said: “The continuing rise of renewable energy is good news for the global economy, energy equity and the climate, and shows that, despite the global recession, real world growth in renewables was just 7% behind the predictions of Greenpeace’s Energy [R]evolution. Moreover, the REN21 findings show that global ambition for a world powered by renewable energy is not only desirable, it is also achievable.”

“Renewable energy is proving itself to be a safe bet for investors, and continues to see substantial growth, even in the face of global recession and price wars over oil scarcity”, said Teske. “However, governments must not be complacent: the transition to a green economy can only be achieved with the support of policies that favour renewable energy,” he added.

The world’s top two biggest carbon emitters, the US and China, are conversely leading the field in renewable energy installation, according to the REN 21 report.

“Investment in renewable energy should not simply be seen as an alternative to making the huge strides needed to phase out fossil fuels and reduce global emissions, when we are still at a tipping point in the battle to stop runaway climate change. Both developed and developing countries still have a long way to go in ending subsidies for climate polluters and to fully embrace a clean, secure renewable energy future,” stressed Teske.