Wednesday, 20 February 2013
0
Robin Whitlock
Expert behind the country’s largest small-scale wind turbine installer says that small-scale renewables provide power for consumers and businesses to protect against themselves from price hikes 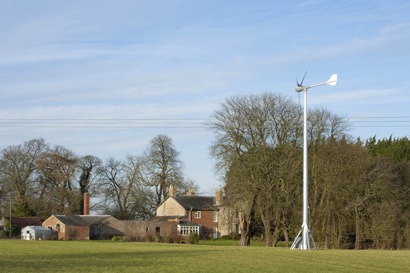 John Moore, Managing Director of Windcrop Ltd, has warned that small-scale renewable energy should not be overlooked in attempts to plug the predicted shortfall in the British energy market. In fact, says Mr Moore, small-scale is already making a difference when most of the measures intended to reduce reliance on energy imports are only still in the discussion stage.

Ofgem warned recently that households across the UK should be prepared for a sharp rise in energy bills within two years as the country comes dangerously close to power shortages. This would mean that the UK has to become more reliant on foreign gas imports in order to generate electricity given that EU rules on pollution require the dirtiest power stations to be closed.

“Unfortunately all renewable energy sources seem to have been lumped into one category” said Mr Moore. “Large scale renewable energy, which Mr Buchanan warned has been hit by the financial crisis, is very different from small-scale options. It’s predicted that power station closures could mean a 10 percent fall in capacity by April alone. Finances aside, it takes on average three years to secure planning permission for a large scale turbine, compared to an average of three months for several small wind turbines. These are also quicker, simpler and cheaper to install, and have less impact on the environment. In the last 18 months, we have taken 2.5MW of generation from concept to operation across the East of England.”

Every kWh of electricity a consumer or business generates through their own on-site generation would require nearly 2kWh of gas to be burnt, even in the latest high-efficiency power stations, Mr Moore pointed out, adding that by installing small-scale wind turbines we continue to make an immediate difference, both to cash-strapped consumers and business and the overall energy market.

Windcrop Ltd was founded in 2009 to make small-scale renewable energy more accessible and empower landowners to cut energy costs and their carbon footprint. It is now one of the largest installers of small-scale wind turbines in the UK with offices in Leeds, Launceston and Honingham Thorpe in Norfolk. The company uses 15 metre high, 5kW turbines which provide electricity at point of use and are proven to blend into the landscape thereby reducing installation time and making planning permission easier to obtain. Each turbines generates an average of 8,000-10,000kWh of free, clean energy per year with a potential increase of up to 16,000kWh in particularly windy locations.