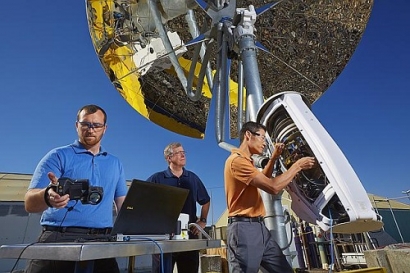 Local officials, members of the business community and energy policymakers had the opportunity to learn about the innovative research behind the projects.  These projects, which have received funding from SoCalGas, the California Energy Commission and the U.S. Department of Energy, support the commercialization of low-cost, commercial-scale renewable energy technology that can help California achieve its ambitious climate goals.

The SDSU Center for Energy Sustainability promotes renewable energy research, provides academic and professional education relevant to California's energy future and contributes to one of the most renewable energy-rich locations in the world.

"We know that there is no simple, single solution to the problem of climate change," said Yuri Freedman, senior director of business development for SoCalGas.  "That is why these types of partnerships, and the research that develops from them, are critical for reaching our environmental goals and keeping California at the forefront of clean energy leadership."

The Hyperlight system operating at the Center for Energy Sustainability is a concentrated solar power  technology which uses sunlight to produce heat for industrial processes.  Water-filled trays support low-cost, linear solar reflectors that aim sunlight onto a heat receiving element.  The system produces high-temperature steam that can serve a range of commercial, industrial and agricultural process heat applications.  Currently, the Hyperlight technology is working in conjunction with Genifuel's hydrothermal processing  technology.  HTP uses heat and pressure to convert wet organic matter, such as manure, algae and biosolids into renewable natural gas.  In this project, the heat is supplied by the sun through the Hyperlight system.  HTP reduces greenhouse gas emissions by three times that of traditional anaerobic digestion and costs about half as much.  It is a highly efficient process, capturing 86 percent of the energy in the waste and using only 14 percent to process it.

"Hydrothermal processing converts wet waste materials into renewable oil and natural gas, directly offsetting the use of fossil fuels," said James Oyler, president of Genifuel Corporation.  "There are enormous amounts of these materials which would otherwise degrade the environment instead of contributing clean renewable energy.  This project shows how the process could benefit California's dairy industry by converting dairy cow manure into renewable fuels."

The third technology demonstrated is the R&D 100 Award-winning solar thermochemical advanced reactor system.  Results from extensive testing show that STARS produces hydrogen from sunlight at record levels of solar-to-chemical energy conversion efficiency. By reacting water with methane, which provides an energy boost, the compact (measuring just a few cubic feet) modular system produces about 15 times more hydrogen than a combination of photovoltaics and electrolysis for the same amount of solar energy.

All of these projects have "real world" applications.  For example, Genifuel's hydrothermal technology is currently being implemented in two commercial projects to process wastewater solids.  One project is in at the Central Contra Costa Sanitary District in Martinez California, and the other is at Metro Vancouver in Vancouver, Canada.