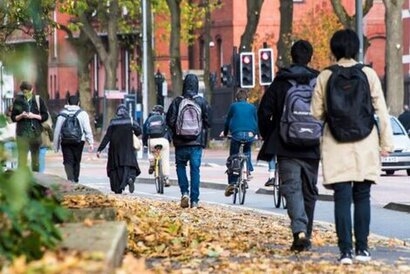 Courtesy of the Department for Transport (DfT).

Transport is the largest contributor to UK greenhouse gas emissions (GHG), with road transport alone accounting for almost a quarter of UK total emissions in 2019. This requires a step change in the breadth and scale of the UK’s ambition to reduce transport’s GHG emissions to reach net zero.

Mr Shapps said that the plan, due to be published today, is genuinely high ambition – technically and feasibly – for all areas of transport, and notes that decarbonisation will rely on future transport technology coupled with necessary behavioural and societal change. The pandemic has seen some of these changes in behaviour occur much faster than the government expected, with homeworking in particular changing traditional commuter and leisure journeys, with video conferencing changing business travel and a rise in cycling and walking.

The government has already delivered 300 cycling and walking schemes and is planning to fundamentally reshape the UK bus network. It has also created Great British Railways with the aim of making rail services easier to use, growing the network and building on the acceleration of electrification. The commitments the government will set out today include linking local infrastructure funding to solutions that cut emissions, increasing support for active travel so that mass transit, cycling and walking plays a much larger role, making the rail network net zero by 2050, achieving net zero domestic aviation emissions by 2040 and leading the transition to green shipping.

The government will also consult on the end of sale of all new, non-zero emission road vehicles by 2040 at the latest. As part of this, it has published a consultation on the phasing out of the sale of all new non-zero emission heavy goods vehicles (HGVs) by 2040 and has also today published a 2035 delivery plan which brings together all the government’s committed funding streams and measures for decarbonising cars and vans into a single document. It outlines the key timelines, milestones and how the government will monitor progress towards its commitment to deliver mass ownership of zero emission cars and vans. It will also increase the level of ambition for the whole central government fleet, moving the target date for the 40,000-vehicle fleet to be fully zero emission forward to 2027.

Also published today is the government’s response to the electric vehicle smart charging consultation. This commits to introducing legislation later this year that ensures all private EV chargepoints meet smart charging standards. This will help to mitigate increasing demands on the electricity system and will also help consumers to save money on their energy bills.

A new Jet Zero consultation will commit the aviation sector to a net zero emissions target by 2050 and the government is today launching and setting out its approach to achieving this.

The Transport Decarbonisation Plan also consults on how the UK gets more ships plugging in to the decarbonised grid, exploring how to phase out emissions from vessels, and considering how to take advantage of the UK’s strengths in the maritime sector to support growth in green technology and shipbuilding.

The government is also publishing its rail environment policy statement, which will set the direction for the rail industry on environment issues and inform the forthcoming sustainable rail strategy. The document will look at traction decarbonisation, air quality, decarbonising the rail estate and a range of other environmental-related issues on the railway, including biodiversity and waste.

The announcement has received a cautious welcome from independent think tank Bright Blue:

“The Government's commitment to electrify its fleet of 40,000 cars and vans is a laudable one” said Patrick Hall, Senior Research Fellow at Bright Blue. “As well as reducing emissions, this will have the added benefit of increasing the supply of zero emission vehicles (ZEVs) into the second hand market, giving those on more modest incomes an opportunity to go electric. However, the Government needs to go further in helping those on more modest incomes, by introducing a Used Plug-in Car Grant for second hand ZEVs. It is imperative that the market for battery electric vehicles – both new and used – grows substantially over the next decade if the UK is to meet its legal net zero 2050 emissions target."

However, smart-charging platform Ohme believes the government could do better:

“We are pleased that the Government has recognised the critical role played by smart charging technology to underpin a successful decarbonisation programme" said David Watson, CEO and founder of Ohme. "Legislation to ensure all private EV chargepoints meet smart charging standards is a step in the right direction, but simply declaring something as ‘smart’ isn’t enough. To ensure these technologies are adopted at scale, we need to see a holistic approach to smart charging to manage the spikes in demand due to mass EV adoption. This must include incentives for consumers, businesses and fleets, in addition to education and awareness campaigns, and greater collaboration between government, energy companies and clean tech companies. Smart charging technologies bring down the cost and complexity of electric vehicle charging and help to balance the National Grid. Without a concerted and holistic effort to encourage adoption, we risk undermining the success of the EV transition in the UK.”