US states, cities and businesses keeping US climate action on track

Tuesday, 19 September 2017
0
Robin Whitlock
New initial analysis announced at Climate Week NYC has found that the US can already meet half its climate pledge by 2025 thanks to the action of US states, cities and businesses. 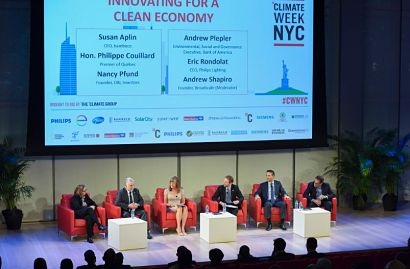 The analysis includes 342 commitments coming from 22 US states, 54 cities and 250 businesses headquartered in the US. Large states such as New York, California and Colorado are making the largest contribution to projected greenhouse gas reductions because of their leadership and size. Cities are generally more ambitious and have a crucial role in implementing greenhouse gas (GHG) reduction targets, while businesses are setting the most ambitious GHG goals – 25 percent reduction in the next ten years.

This means that the Trump administration’s decision to withdraw the US from the Paris Agreement could be significantly mitigated thanks to the determined action of those states, cities and businesses.

The report ‘States, cities and businesses leading the way: a first look at decentralized climate commitments in the US’ is authored by the NewClimate Institute and The Climate Group and powered by CDP data. It was launched at the Climate Week NYC Opening Ceremony and provides the first steps in helping to quantify the contribution of states, cities and business to reduce US greenhouse gas emissions. The report shows that the US can already meet half of its climate commitments under the Paris Agreement by 2025, if the 342 commitments included in the analysis are implemented.

As more and more commitments emerge, further analysis will be undertaken within the Initiative for Climate Action Transparency (ICAT), where the work for this report originated.

“US states, cities and businesses are not waiting for the US federal government to make its position clear on Paris” said Helen Clarkson, Chief Executive Officer of The Climate Group which organises Climate Week NYC. “This new report clearly highlights their unwavering commitment to climate leadership. Importantly, it shows us that climate action is not solely dependent on the actions of national government. US states, cities and businesses have the power to mitigate the consequences of a full Paris pull out. At Climate Week NYC, we are highlighting the unstoppable force of action from business and government in tackling climate change, and how this can drive innovation, jobs and prosperity for all – our central theme for the week. Through our work with businesses, states and regions, we will continue to drive the implementation of these goals, so that we can keep global warming well below 2°C”.

The analysis shows that because of their leadership and size, large states such as New York, California and Colorado are making the largest contribution to projected greenhouse gas reductions. In fact, US states alone deliver more than two thirds of the total estimated emissions reductions. However, cities are more ambitious (average of 22 percent GHG reduction between 2015 and 2025) and crucial for the implementation of specific actions. Businesses currently have the steepest targets, aiming for a 25 percent reduction in the next ten years.

Prof. Dr. Niklas Höhne from NewClimate Institute, one of the authors of the report, added that there are more reasons to believe that the calculated impact of states, cities and businesses in the report is currently underestimated rather than overestimated. The report only included currently recorded and quantified commitments and the actors represented in this report currently only represent 44 percent of total US emissions. Much more action is happening that is not yet recorded or formulated in a quantified way.

For example, global climate initiatives, such as the Under 2 Coalition, for which The Climate Group acts as Secretariat, and the organization’s RE100 campaign have not yet been fully included in the study although they serve to support individual actors and subnational governments to take on more ambitious climate action, and report on progress.

Other initiatives, including America’s Pledge, are also planning to compile and quantify efforts from US states, cities, businesses and other actors to address climate change in alignment with the Paris Agreement.

Climate Week NYC is happening now, taking place September 18-24 in New York City. The event is one of the key summits in the international calendar and has been driving climate action since it was first launched by The Climate Group in 2009. The summit annually takes place alongside the UN General Assembly and brings together international leaders from business, government and civil society to showcase the unstoppable momentum of global climate action.