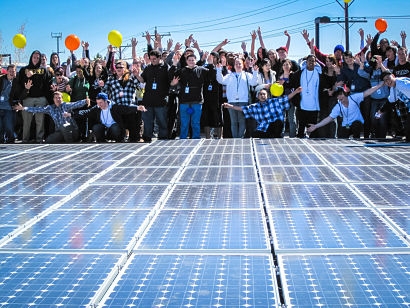 The legislation is presented in two versions, one for competitive electricity markets and one for vertically integrated utility markets. It represents successful community solar policy based on lessons learned from states across the country. Updates to this second version of the Policy Matrix include lessons learned from market developments from the past year, as well as more detailed program design recommendations in key areas such as program size, compensation, customer participation, and low to moderate income participation.

CCSA also partnered with Vote Solar and a number of national and regional solar advocates to host the first ever Community Solar Bootcamp in Philadelphia, Pennsylvania, on December 12-13th. The event brought together industry, nonprofits, and advocates who are or will soon be engaged in legislative and regulatory community solar efforts across the region.

Presenters at the event shared perspectives on how community solar can help consumers – including renters, homeowners, schools, businesses, and local governments looking to reduce their electric bills – and optimal program designs to jumpstart community solar growth in new states. CCSA will support Vote Solar’s ongoing efforts to conduct these events in other regions of the country as interest in community solar from local communities and states continues to grow nationwide.

“We believe that every American family and business should be able to go solar and save, whether those panels are on their own roof or around the corner” said Marta Tomic, community solar program director for Vote Solar. "CCSA’s new guide provides a roadmap of good policy design so that solar can shine for everyone in all 50 states.”