Grenergy is Developing 1,000 MW of Solar Projects in Colombia

Wednesday, 06 April 2022
0
REM
The President of Colombia, Iván Duque, and the Minister of Energy and Mines, Diego Mesa, inaugurated in the department of Bolívar the Tucanes solar park built by Grenergy Renovables; a Spanish company with a project portfolio in the country of 1,000 MW, which is estimated to represent a total investment of 700 million dollars. 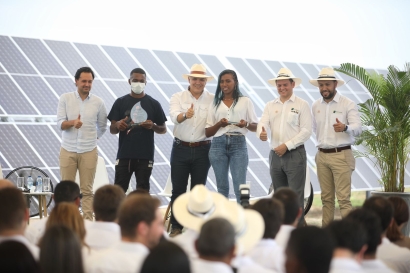 This photovoltaic plant, which is part of a set of 72 MW distribution projects, which will create 700 jobs during the construction phase, and whose annual production of 140 GWh of energy will be sufficient to supply renewable electricity to more than 40,000 homes per year, was inaugurated at an institutional event, which also included senior executives from Grenergy and professionals who have participated in the construction of the project.

The sale of energy is assured through a long-term energy sales agreement with Celsia and its construction has been financed by the local entity Bancolombia. These projects will prevent the emission of around 50,000 tons of CO2 into the atmosphere each year.

In addition, as part of Grenergy's sustainability plan and in its quest to generate a positive social impact on the environment surrounding its projects, the company has promoted the hiring of local labor in the construction process of this wind farm. In addition, it has promoted the participation of women in pre-assembly, fastening and assembly of solar panels, involving 18 women from the area in the construction of Tucanes.

The entry into operation of Grenergy's projects is in line with the Colombian government's strategy to combat climate change and energy transition through the promotion of renewable energies.

A major player in Latin America

Grenergy is one of the major players in the renewable energy sector in Latin America, with a global pipeline of 10 GW of solar and wind projects and close to 5GWh of storage projects in countries such as Colombia, Chile, Mexico and Peru, as well as the United States and Europe.

The listed company's business model covers all phases of the project, from development, through construction and structured financing, to operation and maintenance of the plants.

"In less than four years, we have in our country a path to close 2022 with 2,800 MWp in renewable energy capacity, 100 times more than what we had in 2018. Today once again we are seeing Colombia's new energy in which local labor and women heads of household participate. The energy revolution is still underway," highlighted Iván Duque, the President of the Colombian Republic.

According to David Ruiz de Andrés, CEO of Grenergy, "Colombia has a magnificent opportunity to drive the energy transition thanks to its extraordinary solar resource and the support shown by the Government. For all these reasons, our company is betting on the investment and development of its business in this country".

For his part, Diego Mesa, Minister of Energy, emphasized that "Colombia continues to be one of the world's leading countries in energy transition, as in just three and a half years it has gone from having two renewable energy projects to 79 already installed, including solar, wind, biomass and geothermal initiatives. This is why in events such as CERAWeek (United States), BETD 2022 (Germany) and the Ministerial Meeting of the International Energy Agency (France) the country's energy transition process was catalogued as one of the most successful in the world".

Alejandro Ospina, country manager of Grenergy in Colombia, has advanced that "this solar park marks the beginning of Grenergy's growth story in Colombia, which already has an initial portfolio of 1,000 MW in different stages of development".