Tuesday, 17 July 2018
0
REM
The construction of CHE Vrilo hydropower plant in Tomislavgrad, Bosnia and Herzegovina, officially began with the laying of the cornerstone at a ceremony on July 16. The ceremony was attended by numerous guests from BiH's political, economic and public life as well as guests from the Republic of Croatia led by the State Secretary at the Ministry of Environmental Protection and Energy, Ivo Milatić. 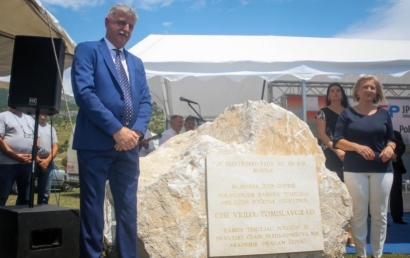 General Manager of JP Elektroprivreda HZHB, Marinko Gilja, addressed the attendees, pointing out that CHE Vrilo is only one of a series of capital energy projects that are being built in HBC.

“By setting this stone foundation for the construction of CHE Vrlio we confirm our development strategy, respecting the new technologies. We want to be the leading the country in production of ‘Green energy’. Our total production is based on clean energy without any adverse consequences on the environment and human health.

We are aware that before the management and workers of EPHZHB is the time of great business challenges, because every new production facility is a step into the future, and therefore uncertainty, this cornerstone is a proof of reliability and persistence.”

The general director announced the start of the tunnel construction in September this year, which would link Buško and Ramsko Lake.

Deputy Prime Minister of the Government of the Republic of Croatia, Ivo Milatić emphasized that BiH is especially important for the development of joint present and future projects.

The ceremony was also joined by the Croatian member of the Presidency of Bosnia and Herzegovina, Academician Dragan Čović, expressing satisfaction with the construction of CHE Vrilo, as well as future energy projects to be built by JP Elektroprivreda HZ HB dd Mostar.

CHE Vrilo will consist of 7 buildings: the upper pool, the entrance of the tunnel, the 5 km long tunnel, the water and latch chambers, the 450 m long pressure pipe; engine room with exit tunnel and exiting building, plateau and gutter and bottom pool.

Worth €89.11 million. (credit and grant from the German State Bank for Development of KfW).

It will produce 196 GWh of electricity annually.