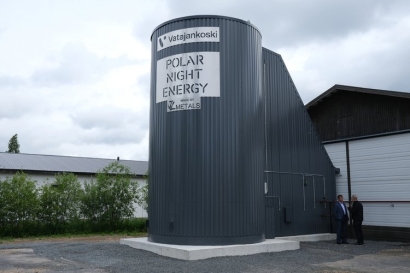 Polar Night Energy and Vatajankoski, an energy utility based in Western Finland, have together constructed a sand-based thermal energy storage. It is the world's first commercial solution to store electricity in the sand as heat to be used in a district heating network.

The storage, with Polar Night Energy’s patented heat storage system inside, is placed on Vatajankoski’s power plant area, and it provides heat for Vatajankoski’s district heating network in Kankaanpää.

"The construction of the storage went well, especially considering that the solution is completely new. We managed to get everything in order despite some challenges and a short delay. Now the sand is already hot," says Polar Night Energy’s Co-Founder and CTO Markku Ylönen and continues,"We have already learnt that our system has even more potential than we initially calculated. It’s been a positive surprise."

The actual heat storage is about 4 meters wide and 7 meters high steel container that has an automated heat storage system and a hundred tons of sand inside. As a material, sand is durable and inexpensive and can store a lot of heat in a small volume at a temperature of about 500–600 degrees Celsius.

The heat storage has 100 kW of heating power and 8 MWh of energy capacity.

"This innovation is a part of the smart and green energy transition. Heat storages can significantly help to increase intermittent renewables in the electrical grid. At the same time we can prime the waste heat to usable level to heat a city. This is a logical step towards combustion-free heat production, says Ylönen.

Vatajankoski uses the heat provided by the storage to prime the waste heat recovered from their data servers which are intended for high-performance computing. Depending on the season, the temperature of the 60-degree waste heat from the servers must be raised to 75–100 degrees before it is fed into the district heating network.

They interviewed an energy and climate specialist Elina Seppänen from the City of Tampere and the managing director Pekka Passi from Vatajankoski in addition to the company founders Markku Ylönen and Tommi Eronen.