Wednesday, 29 June 2011
0
Toby Price
Bayer MaterialScience, a member of the German Bayer Group, has installed a revolutionary new small wind turbine at its offices in Tarragona (Spain), which it uses "for test and presentation purposes". The German firm and the Spanish company, Kliux Energies – Geólica Innovations, responsible for designing the turbine, have signed a "strategic agreement" to investigate new materials. 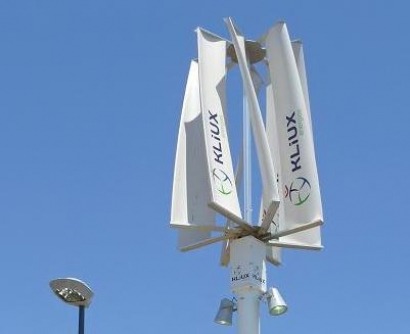 Kliux Energies – Geólica Innovations SL has developed a completely new, intelligent technology for harnessing wind energy. The system is based on special rotors positioned vertically so that they are always facing the wind. The Kliux wind turbines can be installed in virtually any location to generate electricity for local consumption. An integral skin foam based on the Baydur polyurethane system from Bayer MaterialScience was selected as the material for the rotor blades because it meets the exacting demands on strength and lightweight design. The rotor blades are produced by Policam in Barcelona.

The business of manufacturing and installing small wind turbines is recording double-digit growth rates in two areas in particular. In developed countries these are being used in the development of smart grids with decentralized energy generation, while in developing countries and emerging markets they are preferred in regions without electricity supplies and as a substitute for small power plants.

The new wind turbines are very efficient, generating electricity from wind speeds of just four meters per second. The energy produced can either be stored in batteries until it is needed or fed directly into an existing grid. The system has a nominal output of 4 kilowatts, which means that it covers the average power consumption of a detached house.

“The rotor’s unique aerodynamic shape ensures smooth rotation and continuous energy generation, even with varying or strong winds,” says Iñaki Eguizábal, founder and CEO of Kliux Energies – Geólica Innovations. In addition to developing and patenting the rotor, the company has also proven the system’s performance in wind tunnel tests and computer simulations. Including the mast, the wind turbines are nine meters high.

The Rioja region around Logroño, home to the head office of Kliux Energies, is ideal for installing the wind turbines as it is reputed to be one of the windiest regions in the country. The first pilot system was installed here in the summer of 2010, and it has been working successfully ever since. Another pilot system is up and running at Bayer MaterialScience’s Tarragona site, where it is used for test and presentation purposes.

At present, Kliux Energies is working on a mini version of the wind turbine that is just 50 cm high. It is intended as a mobile solution for boats, trailers and camping sites and for sustainable lighting in public spaces.