Thursday, 24 November 2016
0
Robin Whitlock
Siemens has celebrated the topping out ceremony for its new wind turbine manufacturing facility in Cuxhaven, Germany, the company’s first such facility in the country. 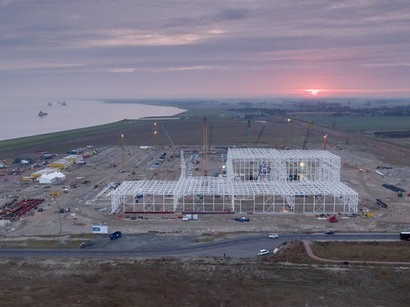 The launch ceremony was attended by German Parliamentary State Secretary Enak Ferlemann, Lower Saxony's State Secretary of Economic Affairs Daniela Behrens, and the Mayor of Cuxhaven, Dr. Ulrich Getsch. The structural steel uprights now stand for the production building, which will offer 56,000 square meters of floor space. This new facility in northern Germany is one of Siemens' most important investment projects in recent years, with some 200 million euros invested in what is the company's first offshore wind turbine production plant in Germany.

In Summer 2015, after announcing the project, the company held an official signing ceremony at the planned site of the factory. In early March 2016 the impact pile driving of approximately 1,900 concrete piles – up to 30 meters long – started at the construction site with construction of the actual building beginning in the middle of June. The new production facility will be located directly at the edge of Cuxhaven harbour and will have a surface area of 170,000 square metres – the size of roughly 24 soccer fields. By mid-2017 the production of nacelles for the next-generation wind turbines D7 is to begin. This includes the final assembly of generators, hubs, and nacelle back-ends which are all connected to form complete nacelles. The location at the port allows heavy components to be loaded directly onto transportation vessels, thereby avoiding expensive ground transportation.

“The decision to build a new production facility in Cuxhaven represents a clear commitment to Germany as a business location” said Joe Kaeser, President and CEO of Siemens AG. “The new Siemens factory will employ up to 1,000 skilled employees. The expansion of offshore wind power capacity in Germany and Europe represents an enormous opportunity for northern Germany and Siemens.”

Siemens' next-generation offshore wind turbines are designed for installation at sea, each delivering an electrical generating capacity of between six and eight megawatts. Siemens' new wind turbine blade manufacturing plant in Hull, England is set to begin operation next week.

There is a growing market for wind turbines designed for erection off shore. Offshore wind power plants are currently being built primarily in the North Sea and Baltic Sea off Europe's northern coastline. However, wind power projects are being developed in other regions, as well, such as along the East Coast of the United States and in Asia off the coast of China and Taiwan.