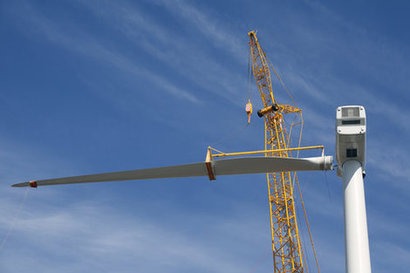 After an extensive selection process, The Blue Circle has chosen Gamesa as the exclusive supplier for its Dam Nai 40 Megawatt project. The G114-2.625 MW turbine will be the first Gamesa turbine supplied to Vietnam and the largest wind turbine installed in the country so far.

The Dam Nai project sits along the Highway One and consists of 933 hectares of agricultural land where a 100 metre meteorological mast had been erected by The Blue Circle in May 2015. Since being awarded an Investment Certificate for 40 MW in July 2016, the company and its Vietnamese Partner TSV have worked on the land compensation process and the engineering of the site, which has one of the best wind resources of South Vietnam and the potential for a total capacity installed of 70 to 100 MW.

The turbine supply contract as well as a 10 year maintenance contract has been signed with Gamesa Wind and the first turbines are expected to arrive this summer on site. The project construction will take place in phases during 2017 and 2018 for a total budget of $58 million. Financial support for the project has been received from Armstrong Asset Management's Clean Energy Fund.

“The Vietnam wind energy target of 4,000 MW installed by 2025 is ambitious but with long term financing it can be turned into reality” stated Olivier Duguet, Chief Executive Officer of The Blue Circle. “Thanks to our shareholder Armstrong Asset Management's investment, we are building the first foreign owned wind project in Vietnam and intend to fully participate in the future growth of what could become the largest market for wind power in Southeast Asia.”

The Blue Circle has a total portfolio of 1,658 MW of projects under development in 5 countries with offices in Singapore, Bangkok and Ho Chi Minh City. Dam Nai will become its first operating project.

The company is a developer of renewable energy projects with a focus on wind power and projects in ASEAN countries. Based in Singapore, it works to bridge the gap in project development in Southeast Asia by bringing international project development experience and financial expertise together with local market understanding.