Vestas’ view of the world from Madrid

Thursday, 07 June 2012
0
REM
Vestas maintains its position as leading turbine manufacturer and celebrates installing its 50,000th MW. Amidst a turbulent economy which has also affected the wind industry, Vestas looks to the future with the certainty that continuous improvement in its operations and maintenance activities will make business stronger. We visited Vestas’ monitoring and control centre in Madrid, one of the five eyes that Vestas uses to look over the world day and night. 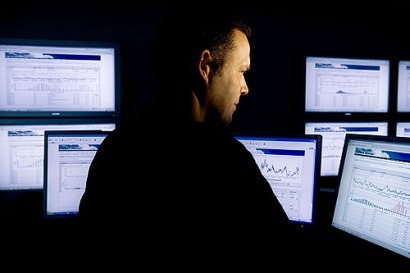 Home to the HQ of both Vestas Iberia and Vestas Mediterranean since 2009, Vestas’ Madrid offices are set in a building designed with strict bioclimatic criteria and has received a LEED certificate for energy efficiency. Its design somewhat resembles the blade of a wind turbine, and although this is pure coincidence, inside the building, all employees are thinking about are turbines and how to get the most out of wind at the least cost. Inside, we find one of the five monitoring and control centres that Vestas has located around the world, controlling 23,000 turbines minute by minute.

Although headquartered in Spain, Vestas Mediterranean covers a much larger scope including most of Southern Europe, the Middle East, part of Africa, as well as all of Latin America. From these offices, Director of Service Operations Paulo Cerqueira’s team monitors and controls 4,500 turbines in 325 wind farms across 14 countries, collectively reaching an installed capacity of 7,700 MW. This goes on 24 hours a day, seven days a week, through contact with the regional teams of technicians.

“When we took into account that our customers primarily focus on the amount of energy produced, we developed the Lost Production Factor (LPF) concept to measure the operative availability of each turbine when the wind blows”. They compare what a turbine is capable of producing under normal conditions with what the turbine has in fact produced. To do this, they use the power curve of the turbine together with the average wind measured by the turbines’ sensors. “In actual fact, we added a new approach which guarantees the operative availability of each turbine in windy conditions. This reduces the Lost Production Factor, and in turn increases the production of the wind farm, going one step further than the traditional approach of guaranteeing minimum time availability. Vestas is the industry forerunner in introducing this technology”, says Paulo Cerqueira.

This new concept is clearly reflected in Vestas’ new Service offering, the AOM 5000 (Active Output Management), which optimises power plant production and minimises customer risk, and has been available on the market since the beginning of 2011.

How do Vestas decrease LPF? They have to take various approaches. On one hand, choosing the correct wind site and the most appropriate turbines for the wind conditions is fundamental. Furthermore, optimum landscape positioning of turbines, improved design, thoroughly tested quality, optimised service and spare parts logistics and ever-more intensive monitoring of the turbines all work towards continuously reducing the Lost Production Factor. Vestas’ supercomputer Firestorm is one of the most powerful computers in the world (70th out of the 100 top supercomputers in the world), and through monitoring and control, it “guarantees the best results regarding turbine positioning analysis and operational strategy”.

Whilst Paulo Cerqueira and José Antonio Salmerón, Head of the Predictive area of the ‘Performance & Diagnostics’ department, tell us about the work done in the Control Centre, the large screens take us to a wind farm in Brazil. An endless amount of information about each and every one of the turbines, their performance, past incidents and alerts immediately appears on screen.

“Vestas uses its technological advantage and gathered experience to operate a unique dual approach to performance monitoring, which considers both constant monitoring and comparison to predict turbine behaviour, as well as reacting to a detected issue”, says Cerqueira. “Whilst the first approach continuously and automatically analyses performance, allowing Vestas to detect issues before they become problems, and thus increasing responsiveness and reliability as well as reducing costs and downtime, the second proves Vestas as an active problem solver, by responding in real time to incidents and alarms and avoiding interruption to contracted availability”.

Take, for example, temperature control, “in the event that we have a deviation in behaviour and cannot identify it on time, the temperature will reach the alarm level stopping the turbine. We can define an alert level to detect these deviations, so Service Team is able to find the root cause and fix it, with the turbine then working again under normal conditions without any risk. This is the difference between reactive, when we have an alarm stopping the turbine, and predictive, where we are able to detect deviations, avoiding potential turbine stops”.

Vestas’ approach establishes an industry benchmark by electronically collecting 140 signals on average from each turbine, performing a continuous and automatic analysis of turbine behaviour. With the help of Vestas expertise and a powerful, easy-to-use tool, Vestas automatically detects deviations in its turbines before they stop. They have been working with this approach for more than five years, giving the company time to integrate concepts such as “fault trees” to analyse what is failing or causing the abnormal behaviour.

“Proof that Vestas is taking its Service Operations very seriously can be seen through the rapid growth witnessed in this area of the business in recent years”, explains Paulo Cerqueira. At the end of 2011, Vestas had secured Service contracts for 35,200 MW in more than 50 countries across five continents, which works out as approximately three quarters of the company’s total global installed capacity. Service revenue in 2011 climbed to EUR 705m compared to total service revenue of EUR 298m in 2007. It is therefore not a surprise that nearly all MWs sold in 2011 included a Service contract, an offering which can cover the wind turbine throughout its lifetime. In fact, the AOM 5000 “all-in-one” service contract runs for up to ten years and may be extended by a further five years at a time.

R&D in Cantabria and at sea

Since 2010, Monte Cotío in Cantabria is home to one of Vestas’ most advanced prototypes, the V112-3.0 MW turbine. The second of its kind, and the first outside Denmark, over the last year, the prototype has undergone every possible type of testing to determine the quality of energy production, the power curve, and component reliability. The selection of the Cantabrian site was primarily due to turbulent wind conditions and difficult terrain. Carolina Garcia Barquero, the V112-3.0 MW prototype project director in Vestas Mediterranean, explained in early 2011 that "the Monte Cotío site is a very suitable place to put the V112 to the test in that, due to the wind, climate and soil conditions, the turbine will be tested in really tough conditions."

The new turbine "cost-effectively leverages the power of medium- to low-wind speed sites, considered, until now, as practically unfeasible or uneconomic". Amongst its technological advances, we should highlight its 54.6 meters blades (eleven meters longer than the previous model, the V90-3.0 MW), the increase in rotor size, along with design improvements made to the blade, which Carolina describes as "remarkable progress in wind turbine aerodynamics". Other notable features include the introduction of two patented solutions the Vestas CoolerTop and GridStreamer systems, "which optimise the cooling of the turbine and improve their integration into the grid, respectively".

Another key laboratory for Vestas is the sea. Offshore wind and its good prospects continue to drive the development of brand new turbines, and Vestas has already taken its first steps. At the end of 2011, the first offshore floating wind turbine was installed in the waters of the Portuguese coast near Aguçadoura, it was a two-megawatt Vestas turbine with a semi-submersible structure.

This project was the culmination of work done by the consortium WindPlus made up by Vestas, electricity giant EDP, and the American company Power Principle, which has developed and patented the new floating technology called WindFloat. The turbine and its was put together at the port of Lisnave, near Setubal, and the whole structure was dragged to its current location, about 350 km off the coast, to be subjected to all kinds of tests. We will undoubtedly have news about its progress over the coming months.

Furthermore, just over one year ago, Vestas presented its new offshore product, the V164-7.0 MW turbine to the market. With a rotor measuring 164 metres, this model will help the wind energy giant ensure the lowest possible energy costs. "This new turbine combines innovation with proven technology. The most innovative part is, along with a wide range of technical features, its size and ability to capture so much more energy", Vestas explains.

Two of the consultants that best know the wind sector, BTM Consult and MAKE Consulting, stated over a month ago that Vestas continues to lead the world ranking of wind turbine manufacturers, despite the strong growth of the Chinese market and competition from local Chinese manufacturers. Vestas maintained in the top spot, but witnessed a 1.4% drop in its share to 12.9%, more than three points above the next competitor, Goldwind (China), whose share also fell slightly. Gamesa’s result is possibly the most striking of the top five manufacturers of 2011. It has climbed three positions in the past two years (seventh in 2009 and sixth in 2010), to reach fourth place, having installed 8.2% of all new wind power in the world in 2011. The two consultants also placed Vestas among the top three in at least half of the ten largest markets worldwide.

The Danish company, after more than 30 years in the wind industry, today announced megawatt number 50,000 (more than 46,000 wind turbines installed in 69 countries). Their turbines represent "almost a fifth of global wind power installed capacity”. According to Vestas, that much power produces energy equivalent to the electricity consumption of 19 million European households and saves the world from the emission of 55 million tons of carbon dioxide.

In the words of its CEO, Ditlev Engel, "nobody could have predicted the speed of technological achievements that have fuelled the growth of Vestas and the entire industry."