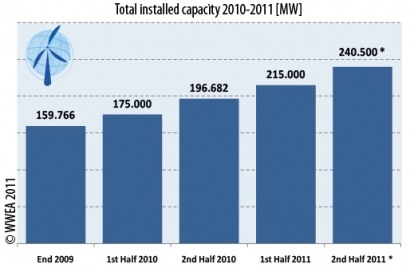 Again in 2011, China continues to dominate the world wind market, adding 8 GW in only six months; the highest number ever within the first half year. From January to June 2011, China installed 43 % of the new wind turbines around the world, compared with 50% in the full year of 2010. By June 2011, China had an overall installed capacity of around 52 GW.

The US market meanwhile added 2,252 MW between January and June 2011, about 90 % more than in the same, but very weak, period of 2010. However, WWEA questions whether the US market can regain the strength it had in 2009 when a total capacity of almost 10 GW was installed within one year.

Relatively strong growth can be observed in Canada which installed 603 MW during the first half of 2011, with Ontario as the strongest province due to the ground-breaking Green Energy Act.

WWEA reports that there are a number of new markets are arising around the world: During the first half of 2011, three countries were added to the list of countries that are using wind energy, increasing the number from 83 to 86: Venezuela, Honduras, and Ethiopia. Also the Dominican Republic installed its first major wind farm and increased its capacity from 0.2 MW to 60.2 MW.

A number of countries introduced new and ambitious legislation for wind power, including Ecuador, Malaysia and Uganda, which adopted systems of feed-in tariffs for the development of renewable energy.

“On the one hand, it is very encouraging that new countries are coming up. On the other hand, we need more support on the national as well as on the international level,” stresses Gsänger. “We hope that especially the UN climate change conference in Durban will lead to better frameworks for wind energy mainly in developing countries. Amongst the industrialised countries, we expect that Japan will play an active and positive role in wind power in the foreseeable future and join soon the group of leading wind countries.”

By the end of 2011, WWEA forecasts that 240 GW of wind capacity will have been installed, almost 3 % of the worldwide electricity demand. In the second half of 2011, an additional capacity of 25,500 MW is expected to be erected worldwide, which would bring new annual installations to 43,900 MW, compared with 37,642 MW in the year 2010. The total installed wind capacity is projected to reach 240,500 MW by the end of this year.