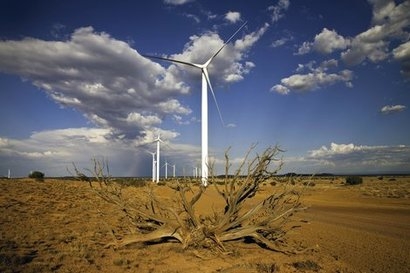 Wind power emerged from 2019 as America’s top choice for new power after building 9.1 gigawatts (GW), representing 39 percent of new utility-scale power additions. With these additions, operating wind power capacity in the US now stands at over 105 GW, enough to power 32 million American homes. In addition, wind energy is now the largest provider of renewable energy in the country, supplying over 7 percent of the nation’s electricity in 2019.

“US wind power has grown significantly over the past decade, as consumers across the country increasingly turn to wind to provide affordable, reliable, and clean electricity for their communities” American Wind Energy Association CEO Tom Kiernan said. “Years of hard work culminated with wind power becoming America’s largest renewable energy provider in 2019, with a 50-state footprint of job creation and economic development. Wind’s near-record project pipeline indicates this growth will continue for years to come. While we are now working to mitigate the significant disruptions from COVID-19, we know that we will meet these challenges with strong industry momentum.”

The US wind industry experienced its third strongest year on record in 2019, as project developers invested nearly $14 billion in new wind projects totalling 9,137 MW. These installations made wind power the number one choice of new utility-scale power generation in 2019, capturing 39 percent of new additions.

Total operating wind power capacity increased 9.6 percent to 105,591 MW, with nearly 60,000 wind turbines now operating across 41 states and two territories. This caps off a strong decade of growth that saw America more than triple its wind power capacity to become the largest renewable power resource on a capacity basis. Wind power represented 30 percent of utility-scale power plant installations over the past ten years.

Texas and Iowa led the country in wind power additions, with both states installing individual record amounts of wind power for a single year. South Dakota had the largest percentage growth in 2019, increasing its installed wind capacity by over 50 percent after installing 506 MW. In total, wind project developers delivered 55 projects in 19 states during 2019.

Large-scale deployment of wind power has helped support grid reliability. Across the country, wind is key to keeping the lights on for American consumers and businesses. In the Southwest Power Pool, the grid across most of the Plains, wind met nearly 28 percent of total electricity demand in 2019 and at specific points in time represented nearly 70 percent of power generation. These types of records showcase the ability of grid operators to integrate very large amounts of wind power.

Having finished the past decade with record growth, the wind industry is poised for continued strong expansion in the coming years. Another 44 GW of capacity is either under construction or in advanced stages of development. Those projects represent $62 billion in investment in the US economy and enough additional power for 15 million American homes, once they’re built.

Alongside the growth in the land-based wind sector, many states are looking to harness offshore wind’s rapidly expanding opportunity. States up and down the East Coast are aiming to develop over 25 GW of offshore capacity by 2035, with 16 GW of new targets announced in 2019 alone. To help meet these targets, states and utilities selected 4,404 MW of offshore wind capacity through state-issued solicitations in 2019.

The US wind industry now directly employs 120,000 Americans, spread across all 50 states. Wind turbine technicians, the workers who build and maintain wind farms, continue to represent the second fastest growing career in the country, according to the US Bureau of Labour Statistics. Meanwhile, veterans find wind jobs at a rate 61 percent higher than the average US industry. Texas continues to lead the way for wind power jobs, with over 25,000 wind workers employed in the Lone Star State. Iowa, Illinois, Colorado, and Indiana round out the top 5 states for wind energy employment.

Wind power is one of the few industries creating new American manufacturing jobs. As of 2019, over 530 US factories across 43 states build wind turbine components, employing over 26,000 Americans. Many of these jobs are in rural or small towns across America, offering young people rewarding careers that allow them to put down roots and support their families without having to leave home.

Demand for wind energy set a record in 2019, as utilities and corporate buyers announced over 8,700 MW of new wind power purchase agreements (PPAs). Utilities signed up for over 5,000 MW of wind energy, while corporate buyers announced 3,460 MW of PPAs. This strong demand for wind energy stems from economics – wind’s costs have fallen by 70 percent over the past decade and wind is now the most affordable source of new electricity throughout much of the country.

“Iconic US companies are joining utilities in turning to wind energy to help drive their business goals and corporate social responsibility commitments forward” Kiernan said. “Wind power provides long-term price stability, allowing companies to invest in their future, without worrying about the price they might have to pay for electricity. Many companies are also drawn to wind’s zero-carbon and zero-water attributes, which help them achieve their sustainability goals. And wind remains good for their bottom lines, since it’s the lowest cost source of electricity in many parts of the country.”

The COVID-19 pandemic is causing unprecedented challenges to the US healthcare system, disruptions to daily life across the country, and deep uncertainty across the economy. Those challenges confront the US wind energy industry as well. The industry remains focused on its primary objectives: ensuring the safety of the wind workforce and protecting American jobs and economic investment.

According to AWEA analysis, COVID-19 is putting an estimated 25 GW of wind projects at risk, representing $35 billion in investment. This includes the potential loss of over $8 billion to rural communities in the form of state and local tax payments and land-lease payments to private landowners, as well as the loss of over 35,000 jobs, including wind turbine technicians, construction workers, and factory workers. Like the benefits of wind development, these losses will be felt most strongly in rural communities. The industry will continue working with Congress and other renewable energy leaders to address the challenges of COVID-19 to ensure projects have the flexibility to continue development.

“Affordable, reliable energy is not a luxury - it’s a necessity” Kiernan said. “It provides the foundation and powers the infrastructure of our great country, ensuring its operations and functionality can continue without interruption on the road to recovery, and the wind energy workforce is working hard to keep the lights on during this trying time.”