Monday, 05 April 2021
0
REM
A $2 billion Australian-first project that aims to turn agricultural crop waste into renewable energy and fuels is off to a flying start in maize fields in northern Victoria. The project, a partnership between renewable energy company AgBioEn, La Trobe University and technology company LAB3, will see grains grown for food, and their stalks and waste converted to renewable fuels at a new facility at Katunga near Shepparton. 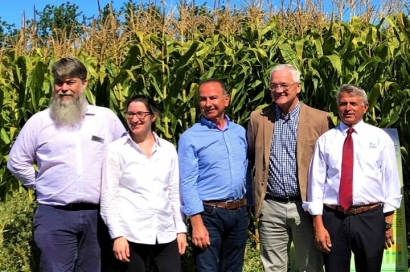 The first trial maize crop was planted in December and benefited strongly from organic fertilizers including chicken litter, green waste and biochar, which improved yield and soil quality.

“The organic fertilizers have already improved soil yield, reduced water use, and increased the amount of carbon captured in the soil – which is exactly what we hoped to achieve with these trials,” said Lozevski.

“Importantly, the quality and amount of the agricultural waste also improved, which is vital for the next stage of the project.”

AgBioEn will now buy, lease or share farms that will be part of a supply chain for growing food crops, such as maize, oaten hay, barley and wheat. The grains will be sold as food, while the crop residue will be used to produce renewable energy and fuels at the Katunga facility.

La Trobe researchers will analyze data from the trials, and three industry PhD students will work closely with AgBioEn over the next four years.

La Trobe University Pro Vice-Chancellor (Research Capability), Professor Ashley Franks said he was pleased that the project was already on the right track to delivering tangible outcomes for consumers across regional Victoria, and globally.

“We are excited to utilize the University’s strong industry partnerships, and expertise in regenerative agriculture, to not only provide a better return on production for farmers, but to also maintain soil health and sustainability in the long term,” Franks said.

“Most importantly, our research will happen in the field, to ensure the project directly benefits farmers.”

LAB3 Director of Data and AI, Alain Blanchette, said the project was a strong example of how the agricultural industry is forging ahead in terms of technological maturity.

"To collect data, LAB3 has harnessed the power of the cloud to deploy Internet of Things devices – such as soil probes, weather stations and multi spectral imagery drones – to measure everything that is happening in real time above and below ground.

"Once in the cloud, we apply data science techniques to deliver the collected data in a way that is clearly set out and makes sense, for the La Trobe University researchers to analyze," Blanchette said.

AgBioEn is Australia’s first fully integrated, carbon negative, renewable energy and fuels project. The Katunga facility is the first of its kind in Australia.