Friday, 20 March 2020
0
Robin Whitlock
Volkswagen Commercial Vehicles (VWCV) has announced the launch of the e-Bulli, an all-electric vehicle based on a T1 Samba Bus produced in 1966 and comprehensively restored. 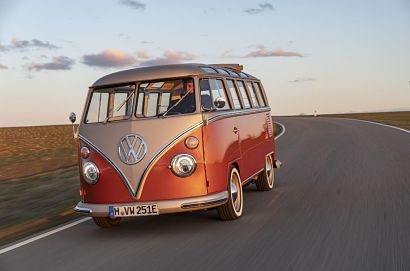 The e-Bulli is equipped with the drive system components of the latest Volkswagen electric vehicles. It was due to be showcased at Techno Classica 2020 but in the current circumstances VWCV will now be presenting it virtually.

It started with the seemingly audacious idea of switching an historic Bulli over to a drive system producing zero emissions on the road in order to bring it in line with the challenges of a new era. To this end VWCV engineers and designers formed a team along with drive system experts from Volkswagen Group Components and the eClassics company, which specialises in electric car conversions.

As the basis for the future e-Bulli the team chose a T1 Samba Bus produced in Hannover in 1966, which prior to its conversion spent half a century on the roads of California. The concept vehicle has completely new drive characteristics, as the electric motor, delivering 61 kW (83 PS), is almost twice as powerful as the 32 kW (44 PS) four-cylinder boxer engine originally serving the vehicle. With maximum torque of 212 Nm, the new drive provides more than twice the force of the original T1 engine from 1966 (102 Nm). In this form, it thus becomes a silent cruiser that combines the fascination of a zero-emission drive system with the incomparable style of a classic Bulli.

A 45 kWh lithium-ion battery supplies the vehicle with power. A power electronics system in the back of the vehicle controls the high-voltage energy flow between the electric motor and the battery and in the process converts the stored direct current (DC) into alternating current (AC). In addition, the on-board electronics are supplied with 12 volts via a so-called DC/DC converter.

The cockpit too has been sensitively modernised. The new speedometer is based on the original, while a two-digit display integrated into it creates a link to the modern era. This digital display in the otherwise analogue speedometer provides the driver with a variety of information, including range. LEDs also indicate whether, for instance, the parking brake is on or the charging connector is plugged in. A multitude of further information is shown via a tablet integrated into the roof console. Via Volkswagen ‘We Connect’ the e-Bulli driver can also call up information online by smartphone app or via a PC and a corresponding web portal such as on remaining charge time, current range, kilometres travelled, trip times, energy consumption and recuperation. Music on board comes from an authentic-looking retro-style radio, which, however, is equipped with cutting edge technology such as DAB+, Bluetooth and USB. The radio is linked to a sound system with out-of-sight components, including an active subwoofer.