Geothermal could replace coal and gas 68 times over

Wednesday, 16 November 2011
0
Toby Price
The geothermal energy consultancy HDR has confirmed that Australia is sitting on vast reserves of geothermal energy, sufficient enough to replace carbon emissions-intensive coal and gas power 68 times over, or in other words, 2.8 million megawatts (MW) within 5 kilometres of the earth’s surface, if 14% of the estimated energy is recovered under existing drilling and power conversion technology over 30 years. 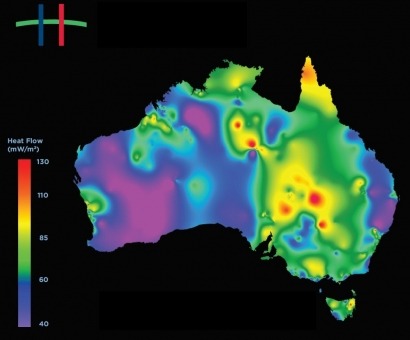 The data, released this week, is the result of a new Global Protocol developed in partnership with internet giant Google to estimate and map the planet’s enhanced geothermal systems (EGS).

The rocks beneath Australia (within 5 kilometres) store enough heat to theoretically provide 85 million megawatts (MW), or all of Australia’s current electricity demand for 50,000 years.

If just 2% of the estimated heat energy within 5 kilometres is recovered with existing technologies, there is potentially 395,000 MW power available – almost 10 times that of coal or gas (40,647 MW current installed generation capacity in Australia).

“This is clean, renewable energy that is realistically accessible today with existing drilling and power conversion technologies,” HDR’s Managing Director Graeme Beardsmore said. “Not only that, EGS has the potential to provide base load power; it is one of the most abundant sources of renewable energy available and is more than sufficient to replace current coal and gas power supply. “Essentially, EGS presents us with a compelling solution to tackling climate change as well as addressing future energy supply issues. Now that Australia has a carbon pricing mechanism, we have the means to work on making clean EGS power generation a reality.”

The HDR-led Protocol development has resulted in the recent release of the first EGS map for the USA, and a preliminary heat flow map for Australia. Australia is also home to the largest EGS project in the world – a project working towards a 25 MW pilot plant in South Australia’s Cooper Basin.

The Protocol, endorsed by the International Energy Agency earlier this year, sets the global standard for determining how the electrical power potential of EGS is estimated in a consistent way around the globe.

International Energy Agency Geothermal Implementing Agreement’s (IEA-GIA) Chairman Chris Bromley said the organisation had long recognised the potentially huge contribution that EGS could make as a global energy resource, and included it as a foundation investigation topic at the IEA-GIA’s creation in 1997. The Protocol provides governments and industry with the means to begin factoring EGS into the energy mix and will also provide greater certainty and confidence for investors based on a deeper knowledge pool.

“Investment in EGS - and conventional geothermal energy – has until now been a difficult proposition because of the lack of information available in order for investors to do the necessary risk assessments,” Dr Beardsmore said. “The megawatt statistics and maps generated under the Global Protocol now provide a tangible knowledge base for proper investment and energy policy development. We know EGS works technically, and we know it can work commercially. The objective now is to make EGS a major part of the future energy mix in Australia and around the world.”

[Photo: Preliminary Australian heat flow map (Temperature at Depth), provided by HDR. A video of this map is also available.]