Friday, 12 May 2017
0
Dan McCue
A new study from the Pacific Institute for Climate Solutions recommends that British Columbia take advantage of its world-class wave power to become a kind of “living lab” for ocean energy technology developers. 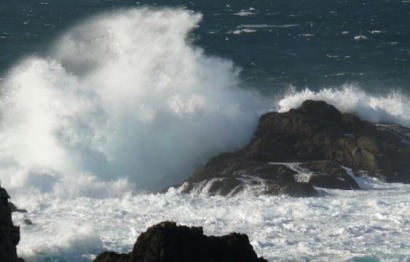 The report, co-authored by researchers at the University of Victoria’s West Coast Wave Initiative (WCWI), Wave Energy: A Primer for British Columbia summarizes key research findings about the magnitude of BC’s wave energy potential, explains how wave energy converters work, and examines the opportunities and challenges of the sector.

The report’s lead-author and WCWI program manager, Bryson Robertson, says it’s common knowledge that BC has one of the most energetic wave environments in the world. But, he says, designing a mechanical device to extract usable electricity from wave motion required specific and detailed information about wave characteristics—and now they have it.

“WCWI within the University of Victoria’s Institute for Integrated Energy Systems (IESVic) has built a 12-year database of BC wave conditions that is globally unique in its extent and comprehensiveness,” stated Robertson. “Nowhere else does anyone have this level of fine-grained detail.  And what that detail tells us is exciting.”

Robertson says now that the WCWI team has built a database of BC wave conditions, it’s time to take things to the next level. “We’ve seen major advances in solar and wind energy and BC now has the opportunity to play a leadership role in wave energy development,” he says.

“I see the initial beneficiaries being remote and/or First Nations communities currently dependent on diesel. Longer term, once greater energy efficiencies are gained, wave energy could be part of a suite of renewable energy sources for BC, as well as provide export potential for cleantech companies.”

The wave energy primer covers other next-step industry challenges, including the high per-unit cost of energy compared to other renewables, biofouling, gaining social license, and operating in a hostile ocean environment.