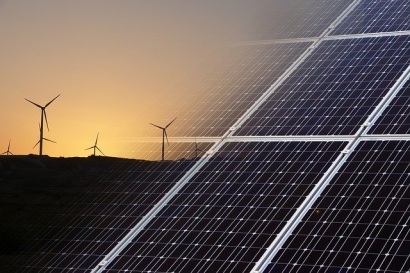 He also vowed that under his plan the United States would achieve entirely carbon pollution-free power by 2035.

"These are the most critical investments we can make for the long-term health and vitality of both the American economy and the physical health and safety of the American people," Biden said during remarks in Wilmington, Del..

The candidate's comments came a day after he participated in a fundraising call with several renewable energy executives.

During that he call he said he hoped to have an irreversible positive impact on the industry and the United State's efforts to address climate change.

"God willing I win and even if I serve eight years, I want to make sure we put down such a marker that it's impossible for the next president to turn it around," he said.

He went on to call climate change "the existential threat to humanity."

Though he acknowledged the nation is still in the grips of the coronavirus pandemic, he also said it might make it easier to get his climate plan through Congress, arguing "it may be the very answer to get us out of this economic situation we're in."

Some in the Biden camp have suggested much of what he proposed Tuesday will be in the first economic stimulus package he proposes if elected president.

The point, he said Tuesday, is "not just to build back where we were before, but better, stronger, more resilient, and more prepared for the challenges that lie ahead."

The plan represents an evolution in Biden's thinking on climate change. On the campaign trail during the virus-abbreviated presidential primary season, he had called for a more modest investment of about $1.7 trillion over 10 years.

He didn't address some of the thornier issues of the climate debate during his remarks, refraining, for instance, from calling for an end to the use of coal or other climate-damaging fossil fuels.

Instead, his plan calls for a less abrupt move away from coal and gas while promoting the deployment of more energy efficient private vehicles -- including electric vehicles -- public transportation and buildings.

Biden also said he will require that 40% of the money he proposes to spend on renewable energy deployment and other investments go to historically disadvantaged communities.

Biden said Trump and Republicans have embraced backward-looking policies that will ultimately harm the environment and "make communities less healthy."

"It's a mindset that doesn't have any faith in the capacity of the American people to compete, to innovate, to win," he said.