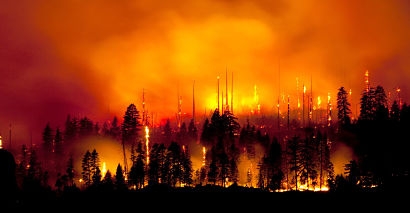 Provider of renewable energy services, GCube Insurance, has highlighted the need for renewables to prepare for out-of-season extreme weather damage. In recent years, extreme weather events such as wildfires and hurricanes have been occurring outside of expected times and locations and increasing in severity. Insurers including Swiss Re and Munich Re have reported that 2018 saw the fourth-highest natural catastrophe losses of all time. In renewables, GCube highlights that extreme weather losses jumped to 15 percent of all claims, which was almost double that of previous years.

As the global climate shifts, the nature of extreme weather is likely to change. This means that damage will be caused outside of season and in unexpected locations.

“Every so often, the market gets caught out” said Fraser McLachlan, GCube Insurance CEO. “As the climate changes, so must our expectation of when and where losses will occur.”

In particular, GCube highlights the way that projects are often sited next to areas of high hazard natural catastrophe exposure (Nat Cat), based on historical data. Projects sited on the edge of these zones, where insurance premiums have historically been lower because they have been perceived as non-critical Nat Cat areas, still carry the same degree of risk.

“Realistically, siting a project on the edge of a flood zone or wildfire area is no better than building one in a flood zone or the wildfire zone – it carries almost the same degree of risk” McLachlan added.

In recent years, GCube has seen several losses as a result of inadequate preparation for extreme weather:

Solar panels in a California parking lot were damaged by burning cars as a result of wildfires.

Unexpected flooding at a solar farm in Texas led to damage to fencing and construction infrastructure, causing delays and revenue loss.

Flooding in Australia caused major damage to a wind farm and significantly delayed a project during construction.

In light of this, GCube has highlighted the importance of evaluating projects on a case-by-case basis. Asset owners and insurance managers must address each project independently, rather than relying on portfolio-wide risk analyses which may overlook individual project features or weather variability.

“Every project has a unique risk profile” Fraser McLachlan said. “The past two years have taught us to think about how that might be affected by changing extreme weather. The US as a whole may not be at high risk of wildfires, but any project in California now needs unique consideration of how wildfire will affect surroundings – both on- and off-season. As extreme weather grows more erratic, preparing for the worst is of paramount importance. Apart from anything,” McLachlan noted, “If a project causes third-party damage, the owner might be liable. Considering risk on a project-by-project basis is the best way to avoid this.”