Friday, 08 July 2022
0
Robin Whitlock
In a bid to reduce dependence on fossil fuels and reach climate targets, Germany just approved what is seen as the largest renewable energy expansion in the country’s history, with the legal package passing the parliament (Bundestag) today (8th July). 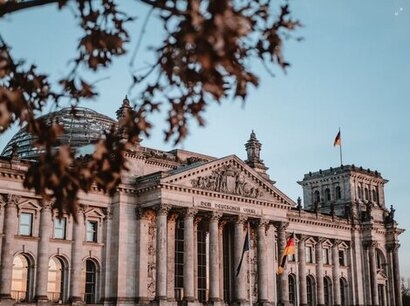 The Reichstag in Berlin. Courtesy of Yannic Kres, Unsplash.

Key elements of the new laws include the following:

Other than proposed by the government, the target of “near 100 percent renewables” in the power grid by 2035 did not get a majority in parliament. However, achieving 80 percent by 2030 sets Germany well on its way to 100 percent clean electricity by 2035. Last week, the G7 under the German presidency committed to decarbonized power sectors by 2035.

In the first six months of 2022, renewables provided nearly half (49 percent) of Germany’s electricity.

NGOs have generally welcomed the solar and wind ambition, which is expected to be the backbone of the renewables plan, but there is opposition to financing biomass plants given the associated emissions and biodiversity impacts.

Parliament will also adopt this week a law to temporarily replace gas reserves with existing power plants (i.e. coal) for a limited period until 31 March 2024. The idea is to prepare for a potential end of supply of Russian gas that still covers 35 percent of Germany’s energy consumption. The government reiterated that it will stick to its plan to accelerate the coal phase-out to 2030. Today’s push for renewable energy is an attempt to make up for lost decades for accelerating the energy transition and to become independent from fossil fuels.

“Energy policy is not just a question of price” said Chancellor Olaf Scholz (SPD) at an event yesterday. “Energy policy is also a security policy. If we want to keep energy affordable in the long term, if we want to reconcile supply security and climate protection, then this is only possible with renewable energies. That’s why we need to kick the expansion of renewables into high gear now.”

Robert Habeck, Minister for Economic Affairs and Climate Action (Green party), added that the package is the largest energy package of the past years, or rather decades and that it implements urgent and much needed adjustments.

“We are leading Germany into a secure future in terms of energy policy” said Mr Habeck. “If we had pushed through these energy law packages ten years ago, we would be in a very different position today.”