Thursday, 20 June 2013
2
Article courtesy of the World Bank A new World Bank program is helping developing countries map their renewable energy potential in a new way that produces rich, nationwide data. The project goes beyond existing solar and wind maps to provide the granular data governments need to understand the country’s full resource potential and to pinpoint the best locations for serving the population. 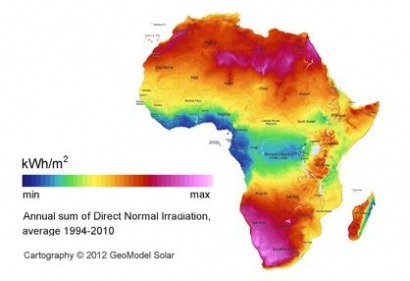 Pakistan encapsulates the renewable energy challenge faced by many developing and emerging countries. Despite abundant renewable resources – including solar, wind, hydropower and biomass – very little of this potential has been utilized. At the same time, about a third of the country’s people do not have access to electricity.

Pakistan has ambitious plans for solar and wind projects, and has developed a comprehensive policy framework for renewable energy, but projects on the ground remain few and far between.

What accounts for this gap? “One major reason is a lack of credible resource data,” says Arif Alauddin, the former CEO of Pakistan’s Alternative Energy Development Board, and now Managing Director of the National Energy Conservation Center.

While high-level solar and wind maps are widely available, these do not contain the granular data required by governments to understand the country’s full resource potential and needed by the private sector to identify specific sites for development.

To address this challenge, Pakistan and eight other countries are joining with the World Bank in a new Renewable Energy Mapping Program (REMAP) to carry out mapping of renewable energy resources that will for the first time produce rich, nationwide data for each country. Coordinated and financed by the World Bank’s Energy Sector Management Assistance Program (ESMAP), the initiative will cover mapping of solar, wind, biomass, and small hydropower potential.

“The importance of this resource mapping [for Pakistan] cannot be overstated,” said Arif Alauddin. “The country’s energy shortage is unprecedented, tariffs are going up, and petroleum imports are eating up a large share of export earnings. There is a need to shift to domestic renewable energy resources.”

Besides Pakistan, the other countries participating in the program in the initial phase are Indonesia, Lesotho, Madagascar, Maldives, Papua New Guinea, Tanzania, Vietnam, and Zambia. A four-year budget of $11.6 million has been allocated to the program, which is expected to expand further in response to client demand.

For developing countries, increasing the share of energy powered by domestic, renewable sources is a critical component to improving energy security and access, strengthening the national fiscal outlook, and transitioning to a more sustainable energy sector. The new program will make funding available for high resolution mapping, ground-based data collection, geospatial analysis, and strategic environmental assessments. The work will be undertaken by World Bank operational units, acting in close consultation with client governments.

“We expect this initiative to be highly catalytic,” said Oliver Knight, Senior Energy Specialist at ESMAP. “Resource mapping is a crucial step in providing the resource and policy certainty that commercial developers need to scale up investment in renewables. In addition, government authorities will be better informed in negotiations on specific projects, and donors will have a clearer sense of the data and capacity needs, as well as the renewable potential, of clients.”

As well as mapping, the program will support a wide variety of activities, including consolidation and validation of existing datasets, work to standardize resource assessment methodologies, and capacity development of local institutions and experts. An open data repository will be developed to facilitate free and open access to the data, and the geospatial outputs (GIS layers) will be made available via a new web portal. The outputs will also be made available to the Global Atlas for Solar and Wind that has been developed by the International Renewable Energy Agency (IRENA) and the Clean Energy Ministerial.

A The REMAP program is one of a number of initiatives the World Bank Group is undertaking in support of the global Sustainable Energy for All (SE4ALL) campaign. One goal of the initative is to double to the share of renewable power in the global energy mix from 18 percent to 36 percent by 2030.

A According to the SE4ALL Global Tracking Framework report produced by a multi-agency team led by the World Bank and released on May 28, renewable energy (excluding biomass) made up only 1.6 percent of total final energy consumption in Sub-Saharan Africa, and 1.8 percent in Southern Asia, as of 2010.

A “The resource mapping initiative will open a floodgate of possibilities for both large and smaller investors, as well as for consumers who desperately need new energy options,” Alauddin said.

A For additional information:

Tags: Renewable energy ,Solar ,Wind ,Biomass ,Hydro ,Africa ,Electricity ,IRENA
Add a comment
Amy Green
7 Facts That Prove the Renewable Energy Revolution Has Arrived 1. Solar is now so cheap that global adoption appears unstoppable. 2. Wind power adoption is rapidly altering energy portfolios around the world. 3. National and subnational energy policies are promoting renewables, and many governments are considering a price on carbon. 4. The financial sector is embracing renewables—and starting to turn against fossils and nuclear. 5. Coal use is in decline in the U.S. and will likely fall at the global level far sooner than once thought possible. 6. Transportation will move away from oil as electric vehicle fleets expand rapidly and bike- and car-sharing spreads. 7. Nuclear is on the rocks thanks to rising costs and widespread safety concerns. Source: http://customwritingz.net/custom-term-papers/
David Silva
In addition check this essay trust service out. It helped me to get my diploma work, when i was moved to America from Pakistan.
wind