Thursday, 21 April 2022
0
Robin Whitlock
UK Transport Secretary Grant Shapps and Business Secretary Kwasi Kwarteng have announced a new group of aviation experts across industry and government who will work together with the aim of making zero emission flight a reality. 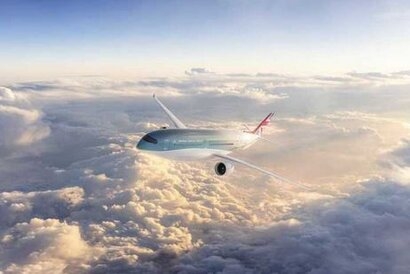 The new Zero Emission Flight (ZEF) Delivery Group will aim to further develop Britain’s role in the global effort to end flight emissions. The group was launched at the fifth meeting of new steering group the Jet Zero Council which is attempting to help position the UK at the forefront of the global shift to green aviation by supporting the development of zero emission aircraft and airport infrastructure.

ZEF Delivery Group will also look at how the law needs to adapt so that sustainable flying can truly become a reality. It will sit under the Jet Zero Council – an advisory forum with experts from across the industry – and will focus specifically on the technology, infrastructure and regulation needed to make zero emission flight a reality.

“From the first jet engine created here in the UK, Britain is truly a world-leader in flying” said Transport Secretary, Grant Shapps. “Now we are determined to revolutionise flying and we want to see everyone have the opportunity to travel guilt-free. We are determined to bring forward the flight technology of the future, and through our new Zero Emission Flight Delivery Group, we will help create thousands of jobs around the country and take another step toward zero emission flights.”

The new group will be led by aviation expert Rachel Gardner-Poole, who joins with over 20 years of experience in military and commercial aviation, both in the public and private sector. Currently the Chief Operating Officer for the Connected Places Catapult, Rachel has previously worked at the Civil Aviation Authority, the UK Space Agency and IBM.

Under Rachel’s leadership, the ZEF Delivery Group will build on the progress made through the Aerospace Technology Institute’s (ATI) FlyZero project and the Department for Transport’s Zero Emission Flight Infrastructure project.

The Government is investing in Aerospace R&D through the Aerospace Technology Institute (ATI) Programme and £685 million will be provided over the next three years, which was announced in March by the Business Secretary.

In addition, Government is providing £125 million (matched by £175 million from industry) of support for Innovate UK’s Future Flight Challenge. The Challenge will shortly announce projects successful in its third funding competition including those advancing electric flight technologies that will support the operation of sub-regional aircraft and the UK in reaching its net zero target.