Thursday, 15 May 2014
0
REM
Germany's state incentives for solar storage systems are entering their second year. Since the program was launched last May, the purchase of around 4,000 solar batteries has been supported so far by low-interest loans of roughly €66 million as well as subsidies exceeding €10 million granted by the KfW development bank. 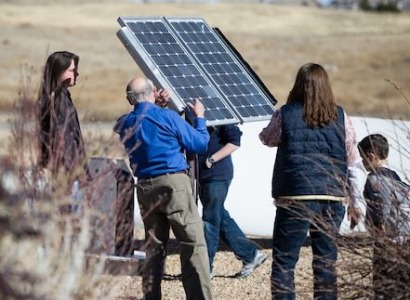 Citing data provided by KfW Bankengruppe, this set of figures was released by the German Solar Industry Association (BSW-Solar), as it reported on the positive results enjoyed by the solar incentive program during its first year.

“The government covers a proportion of the purchase costs, making solar storage systems affordable for both homeowners and business enterprises," said .” Jörg Mayer, CEO of the German Solar Industry Association. "Increasing numbers of people are becoming more independent from fossil energy sources by making the wise decision to invest in a photovoltaic storage system and, in doing so, they are in turn driving forward the energy transition

Battery storage systems make it possible for solar power to always be consumed when it is actually needed, allowing operators of photovoltaic installations to more than double the proportion of solar power they consume on site.

This significantly lowers their electricity bills, as solar power generated on consumers’ own roofs is less expensive than electricity supplied by utilities. By balancing out peaks in production, battery storage systems also contribute towards easing the burden on power grids as well as increasing the connection capacity for further solar installations without additional costs being incurred.

The incentive program has the potential to issue enough repayment grants to support double the amount of battery storage systems per year, which is why the German Solar Industry Association is expecting a significantly higher drawdown of funds in 2014.

The aim of the incentive program is to stimulate the market for battery storage systems, in order to help lower costs and aid the development of storage technology. The KfW supports the installation of a photovoltaic system and a battery storage device with a low-interest loan, while the government covers up to 30% of the purchase costs in the form of a repayment grant.

In order to apply for the financial support, the KfW accepts both certificates from specialist contractors and the “Photovoltaik-Speicherpass”, a quality label for solar storage systems developed by the German Solar Industry Association and the German Central Association of Electrical and Information Technology Contractors.