Thursday, 25 July 2019
0
REM
A bipartisan group of 252 US. mayors, representing every state and one territory, have released a letter through Environment America Research and Policy Center backing the use of solar energy. Elected officials who signed on resolved “to make solar energy a key element of our communities' energy plans” according to the letter. 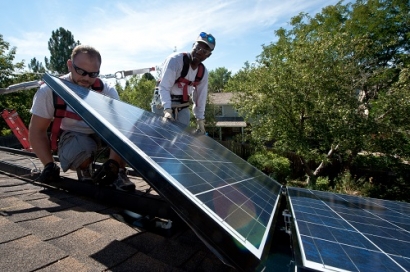 The diverse group of Mayors for Solar Energy cited a number of different solar energy advantages in explaining their commitment to this cause. For example, elected officials in coastal cities like Fort Lauderdale, Florida, which has seen extreme weather and flooding in recent years, understand the vital role emissions-free renewable energy plays in combating global warming.

“As a climate Mayor, I recognize the City of Fort Lauderdale has to do more than just adapt to sea level rise,” said Fort Lauderdale Mayor Dean Trantalis, who was one of 21 mayors from Florida to sign on to the letter. “We have to proactively address the root cause of climate change by reducing our carbon footprint. Solar energy is an important part of that equation -- and for good reason. Fort Lauderdale is located in the Sunshine State where we are blessed with 246 sunny days each year. This makes our city a natural location to capitalize on the value of solar energy.”

The Mayors for Solar Energy are also supporting solar energy development for social and economic reasons.

“Solar power provides us with an opportunity to let the sun drive another component of our economy, as we work toward a cleaner, more sustainable, and energy efficient future,” said Trantalis.

Halfway across the country, Bloomington, Indiana, Mayor John Hamilton is also a solar supporter for a variety of reasons.

"In Bloomington, the vigorous addition of solar capacity in city facilities and at residences is one notable way we're working to reduce our carbon footprint and our reliance on fossil fuels -- while at the same time advancing economic growth and social equity,” said Hamilton.

Since the letter was first released in December 2017, it has grown to reflect the broad bipartisan national support for solar energy. The list of 252 mayors is diverse, representing cities of all sizes and politics. For instance, Democratic Mayor Muriel Bowser of Washington D.C. recently signed onto the letter, as did Republican Mayor Jeff Longwell of Wichita, Kansas -- a historically Republican-dominated state.

This letter comes amidst a surge in state and local renewable energy leadership. More than 100 US cities and counties have committed to repowering themselves with 100 percent renewable energy, including Los Angeles, Chicago, and Salt Lake City. And, to help make ambitious goals a reality, cities are using smart local policies and public initiatives to promote solar energy.

The City of Bloomington, for example, has installed solar panels at more than 30 municipal properties. And, Mayor Hamilton is proud of the city’s group-buy program, a partnership with a local nonprofit organization that makes it more affordable for residents to go solar by offering group discounts.

“Facing a lack of federal leadership on climate and energy, we’re seeing leaders at the community level step forward,” said Emma Searson, Go Solar campaign director with Environment America Research and Policy Center. “Cities are leading the way in transforming the energy that powers our lives and communities, and solar energy provides an ideal opportunity for them to shine.”