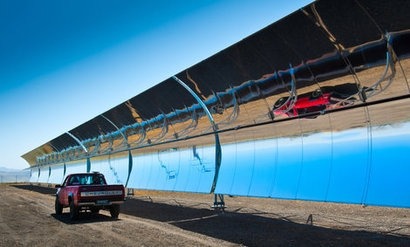 The plant will be built in the Panoche Water and Drainage District in Central Valley and will provide a highly sustainable water source to local water districts by using solar energy to recycle salt water into freshwater. The technology is the first of its kind in Central Valley but the company hopes it will help to revolutionise the way California uses water.

HydroRevolution will be an expansion of the demonstration plant already operated by WaterFX in the Panoche District in 2013. It will be constructed on 35 acres of land currently farmed with salt-tolerant crops with potential for expansion to 70 acres. The site is a small fraction of the areas currently used to manage and resuse irrigation drainage water for the Panoche Water District and other participating water districts (approx. 6,000 acres).

“The demonstration plant proved that we can reliably treat drainage water, and also showed that the treated water is not a waste product; it is a valuable new source of freshwater” said HydroRevolution Chairman Aaron Mandell. “Using a sustainable source of energy to recycle or desalinate water will become a mainstay in regions with water scarcity.”

Panoche Water and Drainage District’s manager, Dennis Falaschi, added that given the trend of highly uncertain water imports from the Delta, there is a need to develop a reliable supply of water in the Central Valley. The new plant will be a sustainable solution that can provide a substantial amount of additional water.

After seeing the results from the demonstration plant, Panoche Water and Drainage District is eager to get the HydroRevlution plant online quickly while also being optimistic about seeing other districts replicate the project in their own areas. Mr Falaschi said there is an enormous resource of subsurface water that can be utilised.

HydroRevolution will ultimately be able to generate up to 5,000 acre-feet of water per year, supplying 10,000 homes or 2,000 acres of farmland. All the freshwater generated by the project will be made available to the Panoche and other nearby water districts. The plant will utilise the Aqua4 technology developed by WaterFX and consists of a concentrated solar still that uses large solar arrays to capture solar thermal energy. This in turn heats mineral oil which then flows to the Multi-effect Distillation system (MED) that evaporates freshwater from the source water. The process recovers over 90 percent of fresh water while the briny remainder can be further treated to produce minerals and salts which are useable as solid co-products.

HydroRevolution is a project of WaterFX that was established in California in 2014. The company is planning an investment crowdfunding campaign to help fund the new plant with investment open to all California residents.