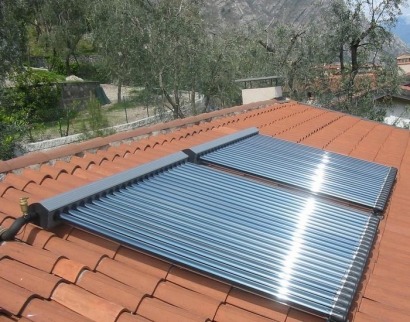 Meanwhile, the European high-temperature solar sector for electricity production has been taking shape with 638.4 MW already installed. 406 MWe of new capacity was added in 2010, of which Spain accounts for almost all of this capacity. A further five EU countries, mostly Mediterranean, intend to develop the sector.

Looking in more depth at what the future holds for Europe’s solar thermal market, the barometer reveals that “the national renewable energy action plans (NREAPs), established by the renewable energy directive 2009/28/CE, have given an inkling of what the sector could be like by the 2020 timeline”. The summary paper on these plans published by ECN (Energy Research Center of the Netherlands) and the European Environment Agency of the 27 EU countries, predict consumption of 3 005 ktoe in 2015 and 6 278 ktoe in 2020. Most of this effort will be produced by eight countries: Italy, Germany, France, Spain, Greece, Austria, Portugal and Cyprus.

Obviously these objectives are at odds with the current trend as they will call for the setting of much more proactive, binding policies if they are to achieve this result. “Our projections are more conservative and are based on the European market returning to growth at an annual rate of around 15%, which would increase the capacity of European collector base to over 80 000 MWth by 2020 (equivalent to a collector surface area of 114 million square metres) and would generate 4 355 ktoe (graph 5). This projection assumes the 1997 White Paper which set a target of 100 million square metres by the end of 2010, will not be achieved until the beginning of 2020,” say the authors of the Solar Thermal Barometer.

For its part, ESTIF (European Solar Thermal Industry Federation), which represents the sector’s interests, has expressed its disappointment with the action plan targets. It feels that many European Union countries seem to have underestimated the sector’s potential.

According to its calculations, the current targets for 2020 would raise solar thermal’s contribution to 1.2% of the gross final energy consumption of the EU of 27, and to 5.47% of the heating and cooling requirements by 2020. These levels are equivalent to an installed surface area of 0.257 square metres per inhabitant, while ESTIF was aiming at a penetration rate of at lease 0.8 square metres per inhabitant.

The association claims this target would be easy to attain if the European Union or the Member States implemented more stringent energy efficiency standards for existing buildings. As it stands, the European building energy efficiency directives only cover few constructions (2002/91/EC Directive strengthened by the 2010/31/EU Directive) – a mere 1% annually of the total building base.

The key to future growth will not only depend on thermal regulation issues, but will no doubt be driven by future conventional energy price trends. The latter should rise significantly in coming years, because of the major investments planned for infrastructures (electricity, gas and oil) and the fact that the worldwide demand is increasing relentlessly. “We should bear in mind that the price of oil crept up and over the $100 per barrel bar at the end of 2010, to reach $125 per barrel last April, and is gradually getting nearer its historic high of $150 per barrel,” says the barometer.

The authors of this latest barometer also suggest that the industry also needs to implement a harder-driving communication strategy to instil the “solar instinct” when the time comes to invest in a new heating system. Installer, architect and institutional landlord training efforts should also be pursued. “The sector’s capacity to reduce its manufacturing costs and launch easier to install, more architecturally-friendly systems on the market will also enhance its success,” they say. “The construction sector and the solar thermal industry will have to work much closer together. The innovations presented at trade fairs and the modernisation of production facilities demonstrate that the sector’s reconstruction is progressing well. Yet the general public will have to be convinced that solar energy is not just wishful thinking, but rational thinking at that.”

The EurObserv’ER Barometer regularly publishes indicators reflecting the current dynamics in renewable energies (solar, wind, hydropower, geothermal and biomass, biogas, biofuels) worldwide and within the European Union. The EurObserv’ER barometer is a project supported by the European Commission within the DG Energy "Intelligent Energy Europe" programme. It is also supported by the Ademe, the French Environment and Energy management Agency.

From this year onwards, the barometer will report back on the development of these two major solar thermal energy technologies (low-temperature heat and high-temperature technologies for electricity generation) in the European Union.