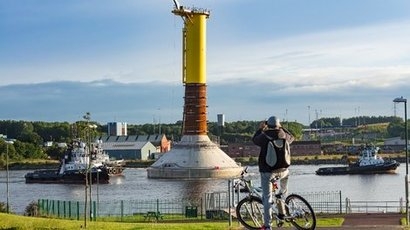 EDF Energy Renewables is currently building the wind project after taking over from Narec (now ORE Catapult in October 2014. The first wind turbine foundation is currently making its way along the River Tyne on route to the installation site. The project is located around 6.5 kilometres off the coast of Blyth and it will consist of five wind turbines in total with a total generating capacity of 41.5 MW. Once operational, the wind farm will generate enough clean renewable electricity to power around 34,000 homes.

The concrete gravity based foundations (GBFs) act as support structures for the installation of the wind turbines. They were designed and built by the Royal BAM Group in the Neptune dry dock on the Tyne and are being installed using the ‘float and submerge’ method in which they are floated out to sea and then submerged onto the sea bed. Each GBF consists of more than 1,800 cubic metres of concrete and weighs over 15,000 tonnes when fully installed on the seabed. They have a total height of around 60 metres from the base to the access platform.

It is the first time this method has been used for offshore wind turbine installation, having previously been used for offshore oil and gas extraction in the North Sea. Current methods of offshore wind deployment consist of the monopile method, in which a monopile is sunk 32-64 feet into the seabed, the gravity foundation method which utilises a large concrete or steel base and the tripod, in which the piles are driven, again, 32-64 feet into the seabed. Deepwater Wind has also proposed using a jacket foundation for its projects in New Jersey and Rhode Island. This technology has been licensed from OWEC Tower AS and previously used at the Beatrice offshore wind project in Scotland.

The float and submerge method has the advantage of enabling the gravity base foundations to be towed out to sea by tugs, rather than utilising more expensive heavy-lift crane vessels.

Once the GBFs are in position, specialist contractor VBMS will begin laying the inter array cables which will connect the five 8.3 MW MHI Vestas V164 wind turbines. The turbines themselves, the largest to be used on an offshore wind farm, will be installed once the cables are securely buried on the sea bed. They are expected to start generating power by the end of the year.

“This is the first major offshore operation on this project and over the coming months people will be able to see the wind farm being built out at sea” said EDF ER Chief Executive Matthieu Hue. “This ground-breaking scheme will benefit the North East of England and help the UK to meet its future low carbon electricity needs. This is the first time that this float and submerge method has been used on a wind farm project. The GBFs are held in place by gravity and this unique design reduces the need to use expensive marine equipment for the installation on the sea bed.”

Divisional Director at BAM Nuttall Scotland and the North of England, Gareth Farrier, added that BAM Nuttall and the wider BAM group will be supporting EDF Energy Renewables on this demonstrator project by delivering innovation and engineering excellence in the way that many of the design and construction challenges are overcome.

Image: A Gravity Based Foundation (GBF) being floated along the River Tyne (EDF Energy Renewables)

Tags: Wind , Offshore , Wind turbine , Electricity , Marine , Oil , Carbón
Add a comment
Angus
I would to know the feasibility (both economic, environmental and engineering) of using such a system to deploy windmills on Hydro generating reservoirs. If one thinks about it for a minute, the reservoirs created from hydro dams have already done their environmental damage and won\'t ly be ever reverted back to the original state. By placing windmills on these waters the destruction of the environment is limited to an already damaged site thus reducing the energy environmental footprint by a percentage. There is also the possibility of using the existing facilities (grid connection and control system) to distribute the flow of electricity in conjunction with hydro power.
biomass