Wind power on the up… literally

Monday, 12 September 2011
0
REM
The wind industry is expanding its horizons upwards! GL Garrad Hassan has published its first market report on high altitude wind energy, concluding that tapping into high velocity, stable air currents at heights of up to 20 km above the earth could be the way forward. 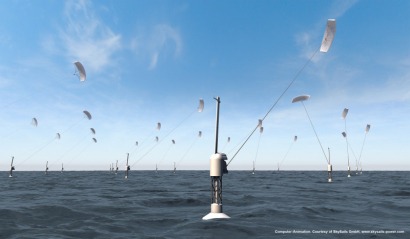 The world's demand for safe and clean energy continues to grow, with renewable sources playing an every greater role. Wind power generation, having expanding offshore, is now not only looking out but up.

The report looks at the potential of high altitude winds as an energy source, the current technologies within the sector and their potential as mature systems. As well as assessing individual technologies and the companies developing them, the report addresses the technical and regulatory challenges faced by the industry and the likelihood of its success.

As this emerging industry has grown, a cottage like mentality with small entrepreneurs and inventors has flourished, with a diverse array of systems types at various stages of development. Small and real scale prototypes from many developers are currently in active development.

The report identifies 22 companies that have already developed, or have announced their intention to develop, prototypes including: kites, kytoons and aerostats, and gliders or sailplanes with turbines or airfoils attached. In Europe and America, these developers are beginning to see an influx of investment from both private and governmental partners and the report looks at the potential for investor involvement at the nascent stages of this industry.

The basis for a HAWE system is relatively simple; a tethered object flying at altitude uses a mechanical system to harness the kinetic energy from the wind. The design of the object, the extraction mechanism and the tethering system, varies considerably among the many systems in development. The system might take the form of a kite, a parachute, or a rotating balloon, or a fixed wing, be tethered in parallel, on a floating platform offshore. GL Garrad Hassan's report looks at the prototypes, the potential of the major players and the challenges that need to be met for the technology to flourish.

Greater wind resource at 200 metres plus

As altitude increases, wind velocity and consistency increases. Wind power increases with the cube of the velocity, so with the greater and greater velocities at greater and greater heights, the potential wind energy increases massively. This logic underlies the push to build turbines with higher towers. HAWE systems are expected to operate at heights of greater than 200m, with the focus being at altitudes above two kilometres. Data for extreme heights has been limited but GL Garrad Hassan examines the potential resource, the associated energy figures, and analyses the energy potential at altitudes of above 1km. Offshore Potential

The wind industry continues to move offshore, with onshore locations often limited in regions with growing energy demand. High altitude systems seem promising in terms of offshore application as they could overcome some of the currently challenging hurdles. The report looks at the potential of HAWE systems in offshore regions, especially where water depth plays a role in the installation of conventional turbine systems. Challenges facing the systems and the current and possible regulatory environmental are analysed in terms of their future commercial applications; and the political and legal frameworks, across multiple regional energy markets, with the potential to affect high altitude technology application are outlined.

“HAWE systems have the potential to take energy generation from wind into a new dimension; unlocking resources with far greater potential energy than so far realised,” concludes GL Garrad Hassan, which estimates that the first full scale systems will soon be on the horizon.