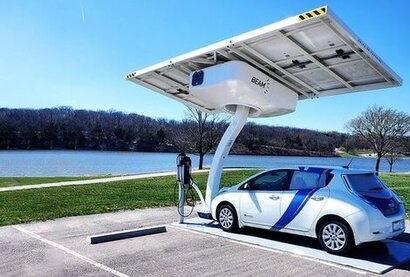 This is the seventh order placed by the City and expands the City’s fleet of sustainable EV ARC EV charging systems to 160. The new units are flood-proof to 9.5 feet, wind-rated to 125 mph and feature an emergency power panel to serve as emergency preparedness equipment for fleet operators and first responders during grid failures and extreme weather events. The systems were purchased using the General Services Administration (GSA) Multiple Award Schedule (MAS) Contract Number 47QSWA21D0006 which simplifies the federal procurement process and ensures best pricing; advantages which can be extended to many state and local government agencies when used for disaster recovery or preparedness purposes.

“New York City is our largest municipal customer and they continue to lead in sustainable and resilient EV charging infrastructure for their growing fleet of zero-emissions vehicles” said Beam Global CEO Desmond Wheatley. “Their EV ARC systems are rapidly deployed without digging up city streets and parking areas, without expensive upgrades to city electrical circuitry, and without concern for high utility costs, saving on City budgets. Resiliency is very important to New York City and the EV ARC system’s ability to provide EV charging during grid outages and emergency power when needed by first responders is another great benefit for the city and their tax payers. Two birds with one stone.”

Each of the City’s EV ARC system generates and stores its own electricity, and is equipped with a Beam factory installed dual-plug EV charger from ChargePoint Holdings, Inc., a leading EV charging network, to power City fleet EVs. EV ARC systems are transportable, off-grid and require no construction, permitting or electrical work, providing City fleet vehicles with access to clean, resilient EV charging. With the increase in climate change threats as well as threats to traditional infrastructure from terrorism or nefarious state actors, Beam Global products are well-suited for municipalities and other entities that increasingly rely upon electric vehicles.

New York City hit a massive milestone as the city announced it has already met its 2025 goal of 4,000 electric vehicles in its fleet. As of September 2022, NYC had replaced around 4,050 gas-powered models with electric vehicles and has the largest electric vehicle charging network in New York State. Greenhouse gas emissions have dropped 19 percent from 2005 levels and the City has its cleanest air in the last 50 years. Brought into law through the Climate Leadership and Community Protection Act (Climate Act), the State of New York is on a path to achieve its mandated goal of a zero-emission electricity sector by 2040, including 70 percent renewable energy generation by 2030, and to reach economy wide carbon neutrality by 2050. The state remains focused on reducing greenhouse gas emissions by 85 percent from 1990 levels by 2050.