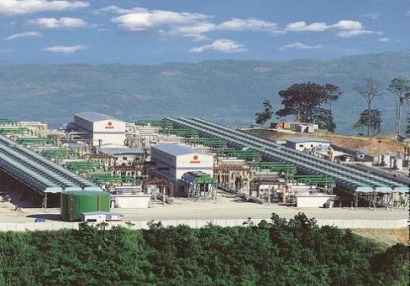 "The number of geothermal projects continues to grow as more and more countries recognize the potential economic and environmental benefits that geothermal power can bring," said Karl Gawell, Executive Director of GEA.

Ben Matek, the report's author, noted there are many projects moving forward that just a year or two ago were ideas on paper.

"This demonstrates how quickly the geothermal industry is growing internationally," he said.

Some of the report highlights are:

By the end of 2013 the global geothermal market is expected to operate 12,000 MW of geothermal capacity on-line.

There are 11,766 MW of new capacity in early stages of development or under construction in 70 countries and territories around the world. Additionally, developers are actively engaged with and exploring 27 GW of geothermal resource globally that could potentially develop into power plants over the next decade.

This year some of the first demonstration Enhanced Geothermal System (EGS) projects provided electricity to grids in Australia and the United States.

Counties such as Uganda, France, Tanzania, Chile, and Rwanda have geothermal projects under construction or in the latter stages of development and will have their first operational geothermal power plants within the next few years.

The report also provides profiles on 21 countries and five continents.

Kenya: Kenya is one of the fastest growing geothermal markets in the world. Kenya’s government is moving a substantial amount of resources into building up its geothermal infrastructure and the support is paying dividends. Right now 296 MW of the over ~1,000 MW of geothermal under development in Kenya are physically under construction. If all projects are completed on time Kenya will lead the world with substantial additions to their geothermal infrastructure over the next decade and become a center of geothermal technology on the African continent.

Indonesia: Despite the massive potential for geothermal power in Indonesia, local experts and the media report that the country still struggles with regulatory issues obstructing geothermal development. That said, Indonesia has almost 4,100 MW in the pipeline for development and 860 MW physically under construction. Indonesia ranks second for developing projects with 57 projects in some phase of development. While no more plants are expected to come online this year in Indonesia, if all the plants are finished by their publicly announced completion dates, Indonesia could reach almost 2 GW of installed capacity by 2018.

Costa Rica: Most of Costa Rica’s geothermal resources rest in national parks, leaving substantial regulatory barriers to its development. Despite the location of Costa Rican’s geothermal resource the government plans to introduce legislation that would open the Rincon de la Vieja National Park in Guanacaste for geothermal project development, a controversial proposal to environmentalists. Even so, the country’s top political leaders acknowledge climate change as an issue that will diminish the capabilities of their hydroelectric power plants, which accounts for most of Costa Rica’s energy production.

In many developing economies there is a growing middle class driving a demand for affordable electrical capacity. In regions such as East Africa and Central America a lack of carbon based fuel resources lead to reliance on high cost/high CO2 emission imported fuel oil.

According to Steve Hummel, Director of Renewable Energy, TAS Energy, international markets are continuing to see robust growth and expansion.

"Established and emerging international markets including Africa, Turkey, Latin America, Indonesia, and the Philippines present a tremendous opportunity for the United States to export renewable technology, professional expertise, capital finance, and geothermal support services to the needs of this global industry," he added. "These key foreign markets have played a significant role in TAS Energy's growth over the past three years with our geothermal technology, and over the past 15 years with our turbine inlet chilling solutions. We look forward to supporting the continued growth and helping the industry further expand to broader markets."

Members of the international geothermal community plan to discuss their successes and emerging market opportunities at the GRC Annual Meeting & GEA Geothermal Energy EXPO in Las Vegas from 29 Sept. - 2 Oct.