Tuesday, 10 May 2011
0
Toby Price
Starting out in iron and steel production, Gestamp made a logical move into renewables at the start of the century after identifying that the renewable energy industry would require huge amounts of steel. In this exclusive interview, we find out where its attention is focused at present. 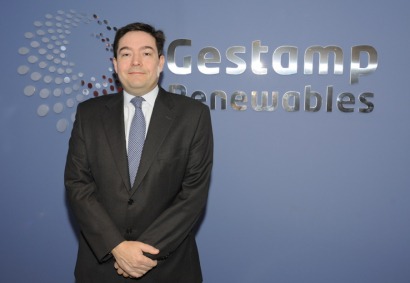 Gestamp Renewables is the renewable energy division of the Spain-based Corporación Gestamp, a multinational leader in the steel, automotive components, and renewable energy industries. It boasts a hundred industrial plants in more than 25 countries spanning four continents, achieved a turnover of over €5 billion in 2010 and has a workforce of over 21,000 employees worldwide.

Gestamp Renewables itself consists of six business units: solar, wind, biomass, CSP, solar steel and wind steel. It is an industrial operator and supplier of components in the renewable energy field, with a uniquely integrated business model, and with a presence in the entire value chain, from manufacturing and supplying of components, to development, construction, maintenance, and operation.

Its renewable energy projects currently includes 1.800 MW pipeline or under construction, and already operating includes 300 MW of wind and 300 MW of solar.

Gestamp Solar Steel and Gestamp Wind Steel have developed their capabilities in parallel with the evolution of the solar and wind sectors and develop and manufacture metal structures for solar fields and wind turbines, respectively. Gestamp Wind Steel for example has four plants in major wind markets producing wind turbines towers: two in Spain one in Brazil, and another one in Turkey producing over 1,700 towers globally per annum.

Recently, Gestamp Wind Steel announced it is to form a joint venture with energy subsidiary of Ohio metal producer Worthington Industries. The 50-50 venture, called Gestamp Worthington Steel, will produce towers for wind turbines for the North American market. For its part, Gestamp Solar Steel announced in February that it is to build a factory in Arizona to support the development of large-scale solar energy projects in the US.

Gestamp Renewables spread across the renewable energy sector gives it a great overview of the sector as a whole, as Renewable Energy Magazine found out in a recent interview with Juan Llovet, Marketing and Communication Director.

How did the Gestamp Corporation end up developing wind farms in Brazil and solar power plants in the New Mexico desert after starting out back in the 1950s distributing iron and steel?

Corporación Gestamp was incorporated in 1958, mainly as an iron and steel distributor. Later on, its core business became converting steel to a product that could be adapted to clients’ specific needs. Later on, the company encountered the opportunity to develop the business of auxiliary automotive parts. Corporación Gestamp became a reference in the steel business worldwide.

In the new century, following the innovating spirit of Corporación Gestamp the group identified the huge necessity of steel that the renewable energy sector demanded. Therefore the incorporation in the renewable sector began with Gestamp solar, then Gestamp Wind and lastly, Gestamp Biomass. Of course; being experts in the steel sector it was a natural step to begin manufacturing wind towers and solar components. Therefore, Gestamp Wind Steel and Gestamp Solar Steel were born.

Looking specifically at Gestamp Wind Steel’s work. It has been announced that you are building a wind turbine tower plant in Ohio to service the US market. Does this indicate that your attention is shifting away from the traditional European market?

Gestamp Renewables is a company constantly seeking new markets. Gestamp Wind Steel has developed global supply relationships with key players in the wind turbine markets and will bring the operational experience needed for the manufacturing of the towers. The recent 50 -50 joint venture with Worthington industries will bring its experience in North America manufacturing, purchasing, and human resources to the venture.

Looking closer to home, the Spanish wind segment has seen a dramatic slowdown since legislative changes were made affecting this market in 2009. Do you still see Spain as a key market for Gestamp Wind and Gestamp Wind Steel with the prospect of the offshore segment filling the gap, or may we see the company downsizing operations there in the future?

For Gestamp Renewables, Spain is as important as any other market with high potential. The company headquarters are located in Spain but, apart from that, the decision of where to build wind farms is based solely on the expected profitability of the project anywhere Gestamp Wind sees an opportunity. We are a global company with global goals.

What about operations in Brazil? Does Gestamp Wind Steel expect to ramp up production in South America in the near future as the renewable sector matures there?

Brazil is an emerging market with tons of opportunities for the development and growth of the renewable energy businesses. That is why Gestamp Wind Steel decided to build an industrial facility for tower manufacturing and components in 2009, with a nominal capacity of 800 towers per year and employing 300 people with a total investment of $36 million. This fact makes it clear that Gestamp Wind Steel is definitely trying to position itself strongly in the Brazilian market.

Gestamp Solar Steel and Gestamp Solar meanwhile are investing heavily in the US, tempted by the fact that solar demand in the US is expected to grow 75 percent in 2011. Do you envisage demand for your steel to come mainly from the solar PV or CSP markets and why?

US is incentivising investments in the renewable energy sector. We hope and expect that the demand for solar PV and CSP increases as well as of the rest of the Gestamp Renewables businesses.

Gestamp Renewables is active around the world. Which other solar markets do you see being most attractive over the next few years and why?

Gestamp solar is already present in several countries such as: Italy, France, India, Peru, the US, Spain, and South Africa. Opportunities are constantly appearing; markets and countries are changing their frameworks to attract international investments. Gestamp solar will go anywhere it can develop, construct and operate a profitable solar plant.

Germany, Spain, France, the UK… the list of countries cutting their solar feed-in tariffs appears to be ever longer. As a solar developer and supplier to the PV industry does this worry you?

The important matter regarding this subject is that as long as the rates are competitive we will continue in those markets. We are confident that Gestamp Renewables’ leadership will create and innovate a model that will suit our investments no matter where they are conducted.

The Fraunhofer Institute recently declared that CSP offers huge potential for industry in the Middle East and North Africa (MENA). Clearly, projects such as Desertec indicate that the MENA region could represent a huge market for solar developers. In light of the recent public uprisings in Tunisia, Egypt and Libya, do you think conditions in this region are stable enough to attract long term investments in CSP?

The region of MENA is definitely an important and potential area in the near future. Of course, the more political stability there is, the better the framework for international investments.

Finally, looking away from your traditional segments, is the ocean energy segment one which you are keeping a close eye on as a possible customer for your steel over the next decade?

Gestamp Renewables is always on top of its game, seeking interesting businesses to continue the company.