Ban announces over 100 commitments to sustainable energy at Rio+20

Monday, 25 June 2012
0
Toby Price
Speaking at the United Nations Conference on Sustainable Development (Rio+20), Secretary-General Ban Ki-moon announced Friday that more than one hundred commitments and actions have been already mobilized in support of the UN’s global sustainable energy initiative. 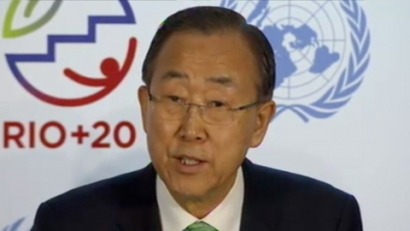 Energy is one of the seven pillars on which Rio+20 was based, since “achieving sustainable energy for all is not only possible, but necessary – it is the golden thread that connects development, social inclusion and environmental protection,” said UN Secretary-General Ban at a press conference in Rio de Janeiro on Friday.

In in September 2011, the UN launched its Sustainable Energy for All initiative to bring together governments, businesses and civil society groups in an unprecedented effort to help make the world’s energy systems more accessible, efficient and cleaner. It is designed to catalyze global action in support of three, interlinked and complimentary objectives, all to be achieved by 2030 – ensure universal access to modern energy services, double the global rate of improvement of energy efficiency, and double the share of renewable energy in the global energy mix.

“This initiative is already mobilizing significant action from all sectors of society. Working together, we can provide solutions that drive economic growth, expand equity and reduce the risks of climate change,” Mr. Ban said during Rio+20.

The International Energy Agency estimates that 1.3 billion people – one in five globally – lack electricity to light their homes or conduct business. Twice that number – nearly 40 per cent of the world’s population – rely on wood, coal, charcoal or animal waste to cook food, resulting in toxic smoke that causes lung disease and death.

“Sustainable Energy for All provides a powerful model for the future,” the UN chief said. “The UN is bringing all key stakeholders to the table to work in common cause for the common good. This initiative shows the power of partnership and ability of the United Nations to spearhead transformational change.”

Among the commitments and actions agreed upon by governments, Ghana, one of the first countries to partner with the initiative, has developed a national energy action plan to support capacity-development and innovative financing mechanisms. Countries initiating or completing similar assessments include Bangladesh, Kenya, Mozambique, Nepal, Tajikistan, Uruguay and Vietnam. Meanwhile, Brazil, the host country for Rio+20, has committed to investing a further $4.3 billion to achieve universal energy access at a national level by 2014.

Among the commitments and actions agreed upon by private sector corporations, small and medium-scale enterprises, Microsoft has committed to going carbon neutral and will be rolling out an internal carbon fee that will apply to Microsoft’s business operations in over 100 countries. Italian energy company Eni has earmarked approximately $5 billion to achieve its gas flaring and carbon intensity reduction goals; and, the Renault-Nissan Alliance has committed approximately $5 billion to commercialize affordable zero-emission vehicles.

Among the commitments and actions agreed upon by financial institutions, donors and development banks, the Bank of America has set a ten year $50 billion environmental business goal, while the World Bank Group has committed to doubling the leverage of its energy portfolio by mobilizing private, donor and public contributions to World Bank-supported projects, as well as supportive policies to expand energy access, renewable energy and energy efficiency.

Commitments and measures agreed upon by non-governmental organizations, artists, academia, and individuals, members of the rock band Linkin Park have launched a campaign urging world leaders at Rio+20 to end energy poverty, while India’s Energy and Resources Institute has committed to expanding lighting services to households in several developing countries, using solar and other clean energy technologies, by 2018. The Institute of Electrical and Electronics Engineers, along with 40 other professional associations, has pledged to mobilize their two million members worldwide in support of the Sustainable Energy for All initiative.

Since the Sustainable Energy for All initiative’s launch last year, more than 50 governments from Africa, Asia, Latin America, and the Small Islands Developing States have engaged with the initiative and are developing energy plans and programmes. The majority are from developing countries that have initiated or completed energy sector assessments and gap analyses, thus laying the groundwork to scale up action in priority areas, undertake strategic reforms where needed, and attract new investments and financial support.

In addition, businesses and investors have committed more than $50 billion to achieve the initiative’s three objectives, and hundreds of actions and commitments are underway in support of the initiative, supported by businesses, donors, entrepreneurs, organizations, artists, and individual volunteers.

Days ahead of the high-level meeting of the UN Conference on Sustainable Development, the UN and its partners also unveiled a new initiative to achieve sustainable urban development by promoting the efficient use of energy, water and other resources, lowering pollution levels and reducing infrastructure costs in cities.

The Global Initiative for Resource-Efficient Cities, open to cities with populations of 500,000 or more, will involve local and national governments, the private sector and civil society groups to promote energy efficient buildings, efficient water use, sustainable waste management and other activities.

“In the context of rapid urbanization and growing pressures on natural resources, there is an urgent need for coordinated action on urban sustainability,” said UNEP’s Executive Director, Achim Steiner.

“This is essential both for preventing irreversible degradation of resources and ecosystems, and for realizing the multiple benefits of greener cities, from savings through energy-efficient buildings, or the health and climate benefits of cleaner fuels and vehicles,” he added.

UNEP also notes that the economic opportunities associated with making cities more sustainable are numerous. As centres of technology, cities can spearhead the creation of green jobs in sectors such as renewable energy. Projections show that some 20 million people could be employed in the wind, solar and biofuel industries by 2030, for example.

The practical steps that cities can take towards resource efficiency are the focus of a new UNEP report, also launched at Rio+20: Sustainable, Resource Efficient Cities in the 21st Century: Making it Happen.

Sustainable Energy for All