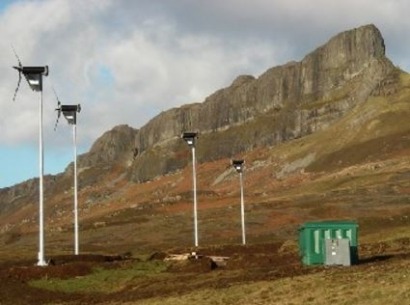 The off-grid system has been running on this 12-square-mile island since 2008. The whole system is run for and by the island via the community-owned Eigg Electric.

If backup energy is needed, it is provided by two 70 kW diesel generators. If there is an excess of power generated it is stored in a bank of batteries, capable of providing power to the whole island for up to 24 hours.

The system was designed to provide at least 95% of the power consumed on the island, from the three renewable resources, and to allow for growth in the population.

Limits are in place to encourage residents to use power responsibly: islanders are asked to keep below 5kW of energy use at any one time, about the equivalent of running a coffee maker and a washing machine at the same time. Businesses get a 10kW upper limit. Those who exceed the limit are cut off from power temporarily and are fined a small amount.

The island has been so successful in managing its power needs while causing minimal disruption to the environment, it is now being visited by researchers from around the world eager to see how it’s done.