Monday, 12 July 2021
0
REM
An award-winning renewable energy specialist is riding a lockdown boom in orders which has seen turnover soar by £1 million in the past 12 months. 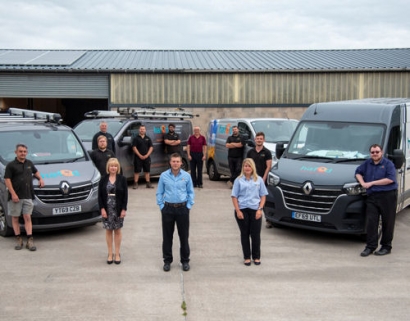 Vale of Clwyd-based Hafod Renewables has installed £2.8 million-worth of new green energy systems in homes across North Wales and Cheshire as householders have swapped holidays for home improvements.

The biggest surge has been in the popularity of cutting-edge air-source systems which now make up 70% of Hafod’s business which now employs 14, up from nine pre-pandemic.

It’s a growth that has seen Hafod, three times Wales’s Renewable Energy Installer of the Year, ideally placed to take advantage of after moving to larger premises at Tremeirchion from Denbigh two years ago.

Managing Director David Jones, who founded the business 11 years ago with his late father, Richard, said, “It has been a very busy year and we have grown as a company with four new staff and two new vans.

“The Government has set a target of 600,000 new air-source systems a year by 2028 – the current figure is 50,000 for the UK – and as we have been installing them for ten years we are well placed to take advantage.

“Since the Feed In Tariff scheme was scrapped for solar panel installations the focus has really shifted to air-source which is also easily retro-fitted to old properties.

“That makes it ideal for older homes in rural areas which have often had to rely on oil or liquid gas systems which are becoming increasingly expensive.”

Hafod have installed 200 new heating systems in the past 12 months, a period that includes two months when Jones  had to furlough his staff, compared with 140 the previous year.

Solar panel systems now account for 15% of the business, ground-source for 10%  and servicing of existing systems is a growing market at 5%.

Jones, a graduate in renewable energy systems, said, “Many people are working from home so they’re spending more time there – maybe ten hours a day they used to spend at work and commuting - and they want to be comfortable.

“They have also probably saved money on traveling to work as well as not being able to go on holiday and they see renewable energy as a way of future-proofing their homes.

“There is also a growth in vehicle charging point installations as motorists switch from diesel to electric cars as they look to fully future proof not only their homes but transportation as well.

“At the same time employers are realizing that people working from home are actually more productive for them as well and can cut office costs.

“Lots of renewable energy companies, particularly solar energy specialists, have fallen by the wayside as grants have come to an end but because we are experienced in the whole range of systems we have been able to cater for changes in demand.”

Air-source systems, which work like refrigerators in reverse, use a heat exchanger to transform the outside temperature of the air to up to 25C indoors with water heated to 65C and can work even when that outdoor air temperature plunges to -25C.

They cost on average between £10,000 and £12,000 and can even be put into reverse to act as air conditioners if a heatwave strikes.

Hafod’s new headquarters near Tremeirchion is entirely powered by renewable energy, with solar panels and air-source systems, and has a zero-carbon footprint along with electrical-charging points for vehicles – they plan to switch their vans to electric when that becomes practical.

Domestic systems currently make up the bulk of Hafod’s work but their track record includes renewable energy systems for over 100 farms, a builders’ merchant, holiday cottages, a bakery, an ice-cream business and a heritage railway.

Caption: Hafod Renewables Managing Director David Jones and his team at their Tremeirchion headquarters are celebrating a bumper year.