Monday, 20 February 2012
4
Toby Price
Scotland moved a step closer to a greener future last week following government approval of the nation’s first near shore commercial wave power array, which will power more than 1,000 homes. Consent has been given for two new Oyster devices to be added to an existing installation to create the commercial array. Meanwhile, Siemens has taken a majority stake in ocean energy firm Marine Current Turbines. 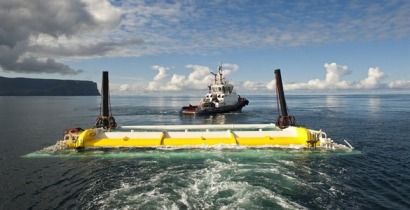 Scotland’s first near shore commercial wave power array, which will power more than 1,000 homes, has been approved by Energy Minister Fergus Ewing. Two new Oyster wave energy converters will be added to an existing device at the European Marine Energy Centre (EMEC) at Billia Croo, Orkney, to allow operators Aquamarine Power to test the devices as an array.

Each of the machines has a capacity of 800 Kilowatts, bringing the total capacity of the array to 2.4MW.Although the machines are demonstrators, the array will be the first near shore wave array in Scotland to be connected to the National Grid, and will supply enough electricity to power more than 1,000 homes.

“I am delighted to grant consent to these two new Oyster devices, the first nearshore wave array in Scotland to feed in to the National Grid,” comments Fergus Ewing. “This array will supply more than 1,000 homes with clean energy, and should the demonstrator be successful the technology being developed here will power hundreds of thousands more homes in future.”

The application has been granted subject to the implementation of a suitable Environmental Monitoring and Mitigation Plan to ensure suitable measures are taken to protect the environment.

“Scotland is in the midst of a renewables revolution, and it is innovation and creativity such as that behind the Oyster device which will help us meet our ambitious renewable electricity targets and help us reindustrialise Scotland,” added Ewing.

Commenting on the announcement Dr Dan Barlow Head of Policy of WWF Scotland said: "Consent for Scotland's first wave energy array that will feed into the grid is an exciting step forward towards realising our huge marine energy potential. Scotland is well ahead of the game in developing wave power and this technology has the potential to be of global significance in our efforts to tackle climate change and offers huge export benefits too.”

In a separate development in the UK this month, Siemens has acquired a majority stake in Marine Current Turbines Ltd., the UK company based in Bristol, which develops and builds tidal power systems.

“The acquisition of Marine Current Turbines (MCT) is an important step forward for the Solar & Hydro Division,” said Ted Scheidegger, CEO of the Solar & Hydro Division of Siemens Energy. “We will continue to drive the commercialization of this promising technology which harvest energy from highly predictable tidal streams. Our target is to secure a leading position in this future business.”

As a pioneering company, Marine Current Turbines has become a technology leader in tidal power systems. Global carbon reduction commitments are increasing demand for reliable marine current power. Experts are expecting double-digit annual growth rates for this sector up to 2020. The worldwide potential for power generated by tidal power plants is estimated at 800 terawatt-hours (TWh) annually. That is approximately 25 percent more than the total power demand of Germany and is equivalent to between three and four percent of global power consumption. Coastal regions with strong tidal currents like those in the UK, Canada, France and East Asia offer major potential for the utilization of this technology.

MCT has already successfully implemented a commercial-scale demonstration project with SeaGen in Strangford Lough in Northern Ireland. Since November 2008, two axial turbines with a combined capacity of 1.2 megawatts (MW) have been providing power to approximately 1,500 households. SeaGen has to date fed more than three gigawatt-hours of electricity into the grid. In terms of power generation this is the largest tidal current power project to date.

Further projects are at the planning stage, including the 8-MW Kyle Rhea project in Scotland and the 10-MW Anglesey Skerries project in Wales. “Siemens’ acquisition is hugely welcomed by staff and management at MCT and signals great confidence in MCT’s achievements over many years,” said Andrew Tyler, CEO of MCT.

Tags: Marine , Wave , Tidal , Grid , Electricity , Solar , Ocean , Marine energy , Hydro , Germany , France , Europe , Ocean energy , Climate change , Canada , Carbón
Add a comment
Patric
Wow! I am sure that this opportunity is awesome. I hope their project will be successful and wave power array appears not only in Scotland. Please keep me updated about any news or changes. By the way - you can check all your new posts at www.custom-paper-writing.org to be sure in their brilliant quality.
www.essays-shark.net
Great post. Really useful info.
Reliable Writing Service
Thanks for this info.It was so exciting info. I don`t know it before. By the way,if you have to write an essay,but havn`t enough info,here you can ask for professional help in any time
escorts in lebanon
urther projects are at the planning stage, including the 8-MW Kyle Rhea project in Scotland and the 10-MW Anglesey Skerries project in Wales.
pv