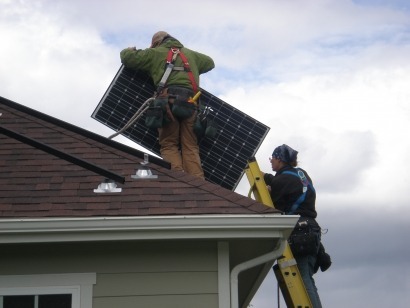 Copenhagen City Council is continuing to implement its plan, approved in August 2012, to make the city the world’s first 100% carbon neutral capital city.

In order to fully realise this objective several significant changes to the city’s energy infrastructure will have to be made including replacing coal plants with biomass, adding to the existing wind and solar energy capacity, improving energy efficiency throughout the city, increasing the numbers of people travelling by bicycle and improving public and mass transportation systems. Denmark already has a substantial renewable energy/green transport infrastructure in place but there is still plenty of room for improvement. The city council hopes that by 2025 around 75% of journeys across the city shall be made by foot, bicycle or public transit. “Green wave” traffic lights will be installed that are set to the speed of oncoming bikes, 44 miles of new bicycle tracks are to be constructed, along with improvements to existing tracks, and 26 “bicycle superhighways” are also to be built.

The city bus fleet is currently being converted to biogas and the council also hopes that by 2025 between 20 percent to 30 percent of cars and small trucks and 30 percent to 40 percent of heavy vehicles will run on electricity, hydrogen, biogas or bioethanol.

Around 30 percent of Danish electricity is already supplied by wind power and Copenhagen also has the world’s largest district heating network where waste heat from power plants is used to keep buildings warm. Water from the city harbour is also used to cool department stores, office buildings, hotels and data centres. This has enabled the city to reduce its emissions by 21 percent from 2005 to 2011. Even more interesting is the fact that many of the city’s residents are investing their own money in the low-carbon drive with half of the turbines in the harbour being funded by individual Copenhagen shareholders. It has been estimated that with private funds factored in, investment in the 2025 Climate Plan could reach $4.78 billion, according to city council officials and that could mean the city serving a useful purpose as a huge laboratory for developing and testing new green solutions.