Thursday, 27 October 2011
0
Toby Price
At the beginning of July, we reported that the International Renewable Energy Association (IRENA) had finally started making headway with its activities, albeit slowly. Now however, it appears that the entry of its new Director General, Adnan Z. Amin, has given the Agency the kick-start it needed to begin its work in earnest. New pilot renewable energy readiness assessments, a renewable energy database, and partnerships with several leading renewables associations are all underway. 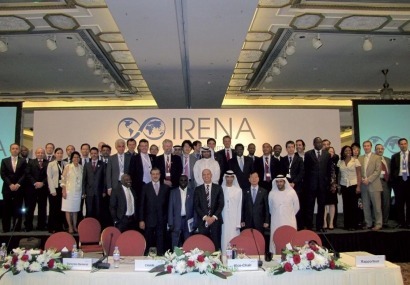 IRENA appears to finally be running at full steam after its new Director General, Adnan Z. Amin, came into office earlier this year. A new more dynamic website with considerably more content is a clear sign that the Agency is now well in business. The Agency’s communications department is now churning out regular press releases, video clips and newsletters, and in the latest of these, the Agency provides an update on progress made over the last quarter.

Senegal and Mozambique have been selected to pilot a renewable energy readiness assessment for the Economic Community of West African States (ECOWAS) and Southern African Development Community regions. The assessment is being done in collaboration with the International Institute for Sustainable Development and an indicative work programme was proposed. The methodology to be applied for the readiness assessments was discussed at a Roundtable on 7 October in Bonn, says IRENA.

Having identified a need to fill gaps in renewable energy information around the world, IRENA has developed an Atlas and Statistics databases, which it reports “have already been used to generate country profiles for Pacific and African countries”.

The Atlas database, which collates all existing references to online atlas and reports and presents this information as a map, highlighting any gaps, is being developed in partnership with the Clean Energy Ministerial Multilateral Working Group on Solar and Wind Atlas, and the World Meteorological Organisation, Geneva.

Financing measurement has already been identified as a bottleneck for resource assessment, and a financing scheme is being negotiated with the World Bank Energy Sector Management Assistance Programme (ESMAP). A demonstration of the Atlas database methodology is also being developed in partnership with the Southern African Development Community (SADC) and the Namibian government.

This database continues to be developed, says the Agency, by expanding and upgrading the information on renewable energy production in existing UN and IEA databases. A questionnaire has also been developed for collecting further information from focal points in IRENA Member countries.

IRENA’s Director General described the Agency as “a reliable and supportive partner” of Pacific Island states during the Pacific Leaders Forum in Auckland (New Zealand) on 7 September. The Agency has applauded these states aspiring to transform their energy sectors by embracing renewable energy.

Amin reported that there are already many positive examples in the region, pointing to Tonga, Tokelau and the Cook Islands which, among others, were already working towards encouraging energy goals. It was inspiring, he added, to see that some countries already envisaged a prosperous future which included 100% renewable energy power supply.

He told the Forum that the creation of IRENA showed that the international community was firmly committed to creating a clean, sustainable and more secure energy future. Africa and the Pacific Islands were a top priority and IRENA stood ready with a generous $5 million UAE grant resource to jump-start the growth of renewable energy in the region, in addition to on-going support from New Zealand.

Mr Amin, who joined UN Secretary General Ban Ki-Moon and Commonwealth Secretary General Kamalesh Sharma as special speakers to the 16 leaders of the Pacific islands gathered at their plenary session, extended an invitation to host a Pacific Leaders summit on renewable energy in January immediately before the next IRENA Assembly.

IRENA is starting to get its voice heard around the world, with agency representatives contributing to several important international meetings in recent months including attendance at the Climate Change Conference of the Parties (COP) preparatory Ministerial meeting in Johannesburg on 15-16 September and a speech at the Economic and Environmental Forum of the Organisation for Security and Co-operation in Europe (OSCE) in Prague on 14-16 September.

To further its reach and influence worldwide, IRENA has also forged several partnerships with institutions and agencies around the world committed to clean energy development.

An analysis, based on 10-15 case studies, of the best policy and regulatory practices that strengthen the uptake of wind energy, is to be made by IRENA in partnership with the Global Wind Energy Council (GWEC). “The analysis is a first step towards building cooperation networks and engaging the private sector and its findings will help develop work plans for target countries,” said IRENA. Plans are underway to expand this initiative to the solar, hydropower, and geothermal industries in the near future.

Over the next few months REEEP will be providing support to IRELP’s conceptual design, and assist in establishing a global database on education and training. REEEP will also support IRENA in building up networks in the RE sector. IRENA’s Council will hold its second meeting on 13-14 November in Abu Dhabi.