Monday, 02 September 2019
0
Robin Whitlock
The British Ambassador to Japan has commended the work carried out by Azuri Technologies during his visit to TICAD7, the long-standing Japanese summit aimed at driving trade and investment to African economies. 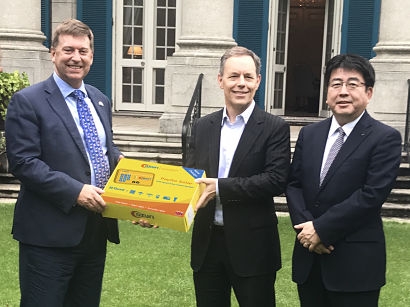 During a conversation on next-generation off-grid energy and its central role in economic development in Africa, Paul Madden the UK’s Ambassador to Japan commented that pioneering collaborations between Japanese and British companies, such as the one between Azuri and Marubeni, will further accelerate the availability of digital technology across the whole of Africa and increase the speed of progress towards the UN Sustainable Development Goal of universal access to energy.

Azuri is a pioneer in pay-as-you-go solar systems. Last month, the company announced a $26 million capital equity investment led by Marubeni, which is among the prominent Japanese corporations at TICAD this year, showcasing the latest technology and services supporting one of the fastest-growing populations and economies in the world.

The British Embassy recently commissioned research, ‘Off-grid electricity in Africa’, demonstrating the need for more action and investment in this sector and highlighted the positive work of UK companies such as Azuri.

Since launching in 2012, Azuri has become one of the leading providers of pay-as-you-go solar power lighting and TV systems in Africa, operating in Kenya, Tanzania, Uganda, Zambia and Nigeria.

“Azuri is delighted to represent on the global stage the depth of Britain’s talent and innovation and demonstrate how renewable energy solutions developed by the UK is helping to change the lives and livelihoods of millions currently without access to energy across Africa” said Simon Bransfield-Garth, CEO of Azuri Technologies.

Azuri-designed solutions deliver world-class technology at an affordable price for off-grid customers who live away from mains power, from home lighting to satellite TV. The company’s vision is to create a level playing field where all African consumers can access and benefit from the digital economy, wherever they live.