Thursday, 05 January 2012
0
REM
Jai Rathod, a founding member of a leading renewable energy advisory firm in India, attended the recent Intersolar India conference and exhibition. He reports back to us on developments at the event, which attracted over 250 exhibitors. 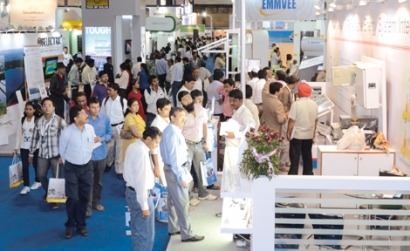 The conference revolved around the various technologies, ground risks, solutions and solar thermal solutions for a resurgent solar industry. The feeling was buoyant with the overall positive effect that prices were at the lowest and the latest round of bidding was at an all-time low with a few skeptics sprinkled in as well.

One of the major topics of discussion, was the role solar could play in ensuring India’s energy security. Inderpreet Wadhwa, CEO of Azure Power, currently developing a portfolio of 50+ MW of Solar PV power plants, made an interesting observation of the current woes of conventional thermal power plants in India due to non-availability of cheap coal versus the kind of private equity investments being pumped into Indian Renewable Energy.

Azure foresees the Indian solar market to be driven by RPO (renewable energy purchase obligation) mandates followed by market forces and peak power demands which will ultimately result in grid parity for solar earlier than expected. Azure Power has also successfully bid for 35 MW of PV projects under Batch 2 of the National Solar Mission at a tariff of Rs. 8.21 per unit (kWh) which leads us to believe that grid parity with other renewables is not as far away as previously anticipated.

Ravi Raina, President of Astonfield Renewables, also pointed out that the situation is grave for India’s energy security at present. India currently imports 75% of its oil requirement which is expected to increase to 90% by 2030, accounting for a whopping 11.3% of global oil trade. Import dependence on natural gas is expected to increase from 19% currently to 28.4% in 2016-17.

The Planning Commission estimates that by end of the 12th Plan, domestic coal output is unlikely to cross 750 mt., leaving more than 200 mt. to be met by imports. With the rupee spiraling downwards, the import bill will continue fuelling India’s fiscal deficit. In this context, the Central as well as the Gujarat government must be lauded for coming out with their solar policies in an aggressive manner.

Mr. Martin Schope, from the German Federal Ministry of Environment, pointed out that Germany is gradually phasing out all nuclear power plants by 2022 in favour of other renewable energies which do not have any of the associated risks of nuclear power. A country like ours - where the wounds of the Bhopal gas tragedy are yet to heal (a massive 25 years after the event) – would do well not to pursue nuclear power in any significant manner.

Mr. Schope also mentioned that prices of Silicon PV modules have dropped from as high as $ 65 / watt in 1976 to under $ 1 / watt today. History has shown us that with every doubling of production capacity worldwide, costs have dropped by 25%.

In India’s competitive Solar EPC market, cost alone, was the deciding factor in most cases. Mr. Rajesh Bhatt from Juwi India, a Solar EPC company, shared his experience in executing Indian PV projects. He cautioned developers that they should remember that the project has to survive 25 years under invariably harsh conditions and equal importance should be given to quality as a small slip-up in any area can significantly impact overall project returns.

Another challenge faced by EPC companies in Gujarat was the unusually high rainfall this year which flooded the project sites to such an extent that tractors had to be used to ferry equipment instead of trucks. On-time completion of projects obviously becomes a major challenge in such events.

Participants also echoed the fact that China does not yet have a stated solar policy. This is where India has an advantage which should be maximized to ensure we attract global solar players and finance. China’s success in wind power would ensure that it attracts massive investments in solar as well and therein lies the challenge for India. However, the astonishingly low bid prices in NSM Phase 1 (Batch 2) leads one to believe that Indian developers would be strong contenders for solar projects worldwide and could turn challenges into opportunities.

Other interesting observations were also made on the trends in bid prices under the JNNSM. Anmol Jaggi, Director, Gensol Consultants, made a tongue-in-cheek estimate based on simple data extrapolation of the bids from Batch 1 and 2 that Batch 3 might theoretically result in a highest bid per kilowatt hour (kWh) of Rs. 6.06 and a lowest of Rs. 4.02! The weighted average tariff of batch 2 bidding process was a low Rs. 8.77 / kWh. He also believed that a solar project based on REC’s (Renewable Energy Certificates) was an attractive model for investors. The main challenges to this however, would be enforceability of RPO’s with debt financing from banks in the absence of substantial collateral security.

The lowest bidder in Batch 2 was the 2nd largest solar power producer in France, Solairedirect, at Rs. 7.49 / kWh. Solairedirect has a portfolio of 120 MW in operational solar assets globally. According to them, the key to be able to bid really low is to have a combination of a vertically integrated approach (module production, project development, EPC, BOS, O&M) along with low cost, structured financing, and finally, a smart grid to maximize solar kWh value for the power off-takers.

This was their approach currently to be able to bid successfully at the prices that have been quoted. A majority of the successful bidders in the latest round of JNNSM Batch 2 are large players, who understand solar and have been able to maximize their value chain to make money at these prices. It is not just a question of throwing a low figure to get allocations. Financial closures need to happen at these prices and would ideally have been factored in by the developers. The government’s decision to go in for reverse bidding so soon did come in for a lot of flak when it was announced but with the process throwing up these prices they should be given due credit now. It shows that ultimately nothing drives down prices faster than market forces.

Need to reduce cost of finance

Solar debt financing has always been an issue for developers other than the big players who have balance sheet strength. Even for these big players, with domestic interest rates hovering around 13-14%, solar project IRR’s (internal rates of return) are significantly impacted in a competitive business environment. The obvious solution to this would be cheaper overseas finance but even then, the benefits of the low rates are currently being negated by the high cost of hedging against currency movements. This reduces the interest rate arbitrage significantly.

Mr. Raina made an interesting suggestion that the government could play the role of the hedger by using 1% of its current foreign exchange reserves thereby reducing massive hedging costs. This would help solar power be more competitive and accelerate deployment towards grid parity with coal based power.

Mr. B V Rao, GM (Project Technical Services), IREDA, views on debt funding for Indian solar projects, based on the JNNSM Phase 1 Batch 2 bid results, are that projects based on Thin Film PV need to have a cost per MW of less than Rs. 8.54 Cr. to satisfy lenders while the equivalent figure for  Crystalline PV would be Rs. 7.7 Cr. He added that IREDA has been at the forefront of solar financing, having already financed 14 projects with total loan disbursements for the current financial year expected to cross Rs. 400 Crores.

Not to be left behind, there was plenty of representation from the solar thermal industry as well. Anil Lakhina, from the Forum of Advancement of Solar Thermal (FAST) highlighted that PV has left CSP far behind in the global solar race…. due to ease of use and quick deployment capabilities. The total installed capacity of CSP is 5% of the total PV capacity. Costs have also not come down at the same rate as in PV due to various factors including the bull run in most commodities including copper. Add to it, the fact that each new CSP plant built, is a step better than the earlier one. While this is good, it does little to comfort banks specifically Indian ones who would much rather lend to proven technology that has “stabilized” and is standard with no surprises.

However, CSP has inherent advantages over PV, case in point, is the 19.9 MW Gemasolar CSP plant near Seville, Spain. Built by TorreSol Energy – a joint venture of Masdar of Abu Dhabi with the Spanish engineering firm Sener – the plant uses “tower” technology, that produces electricity 24 hours a day using thermal storage from molten salts. The high plant load factor (PLF) puts it in the league of conventional coal fired thermal power plants and provides impetus to CSP developers who hope to leapfrog PV technology. Lanco Infra is also building a 100 MW CSP plant at Jaisalmer with 4 hour storage with a commissioning date of March 2013. It is also pertinent that at present, CSP can be completely indigenized but not PV.

Solar Thermal also has great potential for industrial process heat in India. With attractive payback periods of between 2-4 years depending on the application & irradiation available, solar thermal can be used to reduce our dependence on expensive furnace oil & equivalents in addition to reducing carbon emissions.

Editor's note: Jai Rathod is a founding member of Natural Energy Solutions Pvt Ltd based in Mumbai (India) which focuses on creating innovative and profitable business models within the Indian energy space.

You can reach him at jai@natgrp.net and the organization's forums at Renewable Energy and Cleantech Forum - India as well as Solar Energy Professionals - India