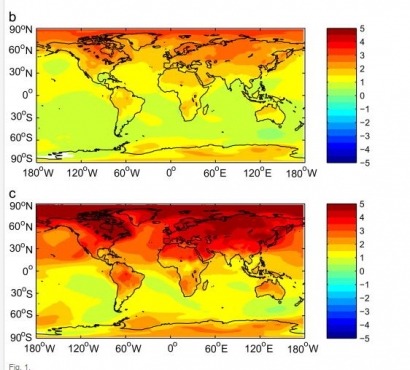 According to researchers at the European Commission’s Joint Research Centre, a global reduction of aerosols emissions in 2030 will likely result in up to 10 percent increase of photovoltaic energy (PVE) potential in western Europe and the eastern Mediterranean while a reduction of up to 7 percent would affect northern Africa and eastern Europe.

These are some of the findings published in a recent JRC article which investigates the likely availability of photovoltaic energy (PVE) in Europe and Africa in 2030, under a scenario of reduced anthropogenic emissions, such as greenhouse gases and aerosols.

The authors used a state-of-the-art aerosol-climate model to simulate the availability of PVE in 2030 under three different aerosol emission scenarios: a) aerosols kept at their 2000 levels, b) aerosols reduced to the maximum feasible level in Europe only, and c) aerosols reduced to the maximum feasible level worldwide. Significant global warming was simulated under all three scenarios, the intensity of which is directly related to the reduction in sulphate aerosol emissions.

The study found a significant response in PVE production potential to aerosol reductions. Its model simulations for 2030 predict increased global temperatures, greater cloudiness and reduced solar radiation over northern Africa, clear skies over western Europe and the Mediterranean, and increased storminess and reduced solar radiation over northern and eastern Europe. PVE productivity is expected to fall in eastern Europe and northern Africa (by up to 7%) and to increase in western Europe and the Mediterranean (by up to 10%).

The authors call for a broader use of improved climate models in the assessment of the future availability of renewable energies, and highlight the importance of air quality policy options in PVE productivity. They particularly stress the importance of including aerosol dynamics in climate simulations, given the impact of aerosols on atmospheric dynamics and radiative balance.