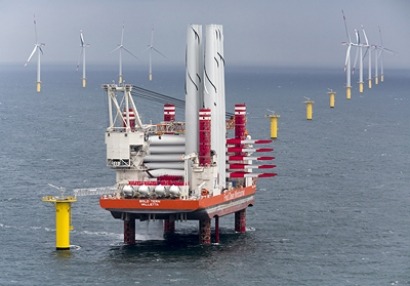 The work involves three individual offshore sites: the 498 MW Fécamp, 450 MW Courseulles-sur-Mer and 480 MW Saint-Nazaire wind farms. The development of the three sites has been awarded to a consortium led by EDF Énergies Nouvelles and Enbridge. LOC Group has been working with the consortium to offer early-stage guidance on the design work and ensure the safety and security of the construction process.

The French government is actively seeking to grow the country’s offshore wind industry and is therefore keen to appoint companies in the industrial and maritime sectors with a local base. LOC’s Paris-based renewables team consists of highly skilled, bilingual professionals, making them the ideal partner to carry out MWS services on the three wind farms. The team is working closely with EDF Énergies Nouvelles to advise on the transportation and installation of the individual turbines, and ensure all procedures meet the standards required by the marine warranty surveyor.

As part of its MWS offering, LOC has accounted for the varying environmental conditions and water depth at each site. In particular, initial drilling revealed very different soil conditions, with Saint-Nazaire having a hard seabed, Courseulles-sur-Mer a softer one made up mainly of clay and limestone, and Fécamp’s being chalk-based. As a result, the 83 turbines at Fécamp will use gravity-based foundations, while the other two sites will use monopole foundations for the turbines.

“As the very first turbines to be built in French waters, these are important projects for the development of France’s offshore wind industry” said Hugues Delanoue, Managing Director of LOC France. “We are proud to be providing full and independent third-party technical review and approval of the construction and transportation project operations over the entire contract. The LOC Paris team is also advising and contributing to the review of preliminary submissions for the next round of tenders for the foundations and offshore stations in the French market.”

R V Ahilan, Group Director, Renewables Advisory & Energy Technology at LOC, added that France intends to install 6 GW worth of wind farms by 2020, and is taking a leading role in developing opportunities in floating offshore wind. In this market, the offshore engineers of the LOC Paris team are well placed to take a lead role in the industry’s development in France.

To date, LOC has acted as MWS on more than 1,000 large energy infrastructure projects of all types, as well as thousands of other smaller marine operations, marine warranty services on behalf of underwriters, their assureds, the assured’s contractors, or for self-insured clients.