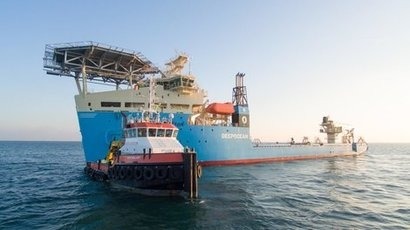 During the two-week testing period, MTS Vigilant, a Damen Shoalbuster, undertook essential anchor handling work to test the capabilities of the new vessel’s advanced mooring systems ahead of her handover to end client Maersk Supply Service and charterer DeepOcean. During the comprehensive sea trials of the vessel in early 2016, MTS was engaged to provide anchor-handling support as Damen tested and calibrated this complex anchor system, running and positioning anchors as required.

MTS Vigilant, the multi-purpose tug deployed to undertake the work, is itself a Damen-built vessel, developed for a range of applications including anchor handling, dredging support and barge towage. As such, the capabilities of the 3009 Shoalbuster were well known to Damen, and MTS’ longstanding relationship with the boat-builder and ability to quickly deploy the vessel to the test site in the Black Sea saw the firm selected as the chosen operator for the contract.

Current and anticipated growth in the offshore energy sector throughout European waters continues to drive demand for versatile subsea support vessels to carry out critical cable laying and interconnection work. These large vessels must be equally capable of keeping position in the deep-water environments of new offshore wind farms and working closer to shore in the proximity of onshore substations.

As such, modern cable laying vessels such as Maersk Connector are not only fitted with Dynamic Positioning (DP) to address the challenge of working far from shore, but also equipped with sophisticated multi-point mooring systems making use of a number of anchors to allow increased manoeuvrability closer to shore.

“Given the highly demanding nature of offshore energy construction, the versatility and manoeuvrability of large modern subsea support vessels such as the Maersk Connector is critical to the success of a project” said Jon Parslow, Managing Director, MTS. “While sophisticated dynamic positioning systems are increasingly being installed on larger ships, in shallower waters there’s no substitute for more traditional anchor and mooring mechanisms – and the support of smaller tugs and anchor handling vessels is a crucial part of the process.”

Tjarco Ekkelkamp, Senior Project Manager, Damen, added that putting a large new-build vessel through its paces requires the involvement of a number of trusted partners with project-specific expertise and that MTS’ ability not only to provide the right tool for the job in the right area of the world at the right time, but also to deliver the operational expertise that Damen was looking for ultimately helped the company to complete the sea trials of Maersk Connector on time and to budget.

MTS provides a wide range of marine services from towage, tugs and civil engineering support to pilotage and shipping agency and has worked in markets including dredging and offshore renewables. The company is based in UK offices in Brixham and Falmouth and provides high-quality services to the marine and civil industry across the globe, from the UK and Europe to markets including South America, Australia and West Africa. MTS has vessels currently stationed in the UK, Mediterranean, German North Sea, South America and Australia.

Image: Another of MTS vessels, the MTS Vengeance