Friday, 17 April 2015
2
Robin Whitlock
According to the American Wind Energy Association (AWEA), wind energy has avoided the consumption of over 68 billion gallons of water in the US in 2014, in addition to many other benefits and savings. 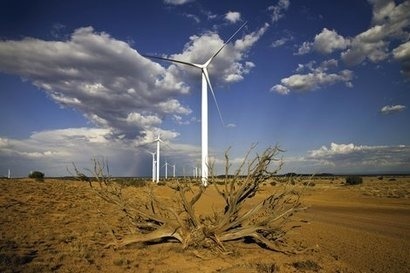 US wind power saved the equivalent of around 215 gallons per person or 517 billion bottles of water, according to a report by the AWEA. This is an increasingly valuable benefit as severe drought continues to affect many of America’s primary wind-producing regions. For example, in drought-ravaged California, wind energy saved 2.5 billion gallons of freshwater in 2014, while Texas led the nation with savings of 13 billion gallons of water.

The U.S. Wind Industry Annual Market Report has also found that wind energy production avoided an estimated 125 million metric tons of carbon dioxide during 2014 – more than 5.7 percent of US power sector emissions or the equivalent annual emissions of 26 million cars. This has drawn the attention of many states and utilities who are seeking a low-cost way to comply with EPA’s proposal to reduce carbon pollution from existing power plants through the Clean Power Plan.

According to the report, the US now leads the world in wind energy production. In 2014, US wind farms produced over 181 billion kWh of wind energy, enough to power the equivalent of 16.7 million American homes. Wind generation in the country has more than tripled since 2008, providing 4.4 percent of the nation’s electricity in 2014. Wind energy also provided the largest increase in generation for any energy source in 2014.

2015 began with 12,700 MW of wind projects under construction. Four times more new wind generating capacity came online during 2014 than the previous year. Wind deployment was down 92 percent in 2013 from 2012 levels because of policy uncertainty caused by the brief lapse of the Production Tax Credit (PTC) at the end of 2012. That lapse resulted in the loss of 30,000 wind industry jobs in America.

American wind industry jobs and turbine deployment have now regained momentum, adding 23,000 jobs during 2014 thereby boosting the sector’s total to 73,000 jobs. The US wind manufacturing sector now employs nearly 20,000 workers in more than 500 facilities across 43 states, in addition to 53,000 other jobs in project development, construction, operations, and other parts of the industry. The industry also attracted $12 billion in private investment in 2014, reaching a total of more than $100 billion since 2008.

“These results show that extending the Production Tax Credit (PTC) for wind power in 2013 was good for business in America” said Tom Kiernan, CEO of AWEA. “We’ve got a mainstream, Made-in-the-USA product that supports jobs in every state and is gaining momentum. With a more predictable policy we can add more jobs and keep this American success story going.”

The benefits of the PTC are fully visible in states like Iowa, where wind energy has attracted $10 billion in cumulative investment and supports 6,000 jobs. According Iowa Republican representative Steve King, the state gets nearly 30 percent of its electricity from homegrown wind power, more than any other state. Technological improvements and scaling up of domestic manufacturing, has enabled the US wind industry to reduce the cost of wind energy by more than half over the last five years. The PTC has also enabled the private sector to make critical investments in domestic manufacturing and the US workforce, leading to significant cost reductions.

Utility-scale turbines are now operating in 39 states. A US Department of Energy report released in March, showed that wind energy in the country can double within the next five years to supply 10 percent of US electricity by 2020, 20 percent by 2030 and 35 percent by 2050. Progress in the industry has created a ‘wind rush’ within the country which is at its height in Texas with 7,500 MW of wind projects currently under construction, more than all the other states combined. This has in turn created a rural economic development boom within the state and helped to lower energy prices for consumers. The completion of the Competitive Renewable Energy Zone (CREZ) transmission lines in 2014 has helped drive growth by opening up Texas’s world-class wind resources to development, something that will be replicated in other areas such as the Plains and the Midwest where major new transmission upgrades will be established.

Tags: Wind ,Wind energy ,Jobs ,Electricity ,Saving ,Renewable energy ,wind farm ,Carbón
Add a comment
Joacchim
It would be nice to know exactly what water is being saved, since very little if any water used in fossil power generation leaves the hydrological cycle. Granted, it returns warmer but it's definitely not lost.
Jay
It is not explicit, but it is presumed the "water savings" here is the water not evaporated in wet condensers of thermal power plants. This is a minor point, but it is worth noting that this water goes into the atmosphere and is not removed from the hydrological cycle. On the other hand, the water used in fracking that is not reclaimed is injected deep underground, and will never again be in the cycle. VERY big difference. It seems strange that places experiencing frequent drought (like much of the US southwest) would allow fracking at all.
¡Suscríbete!
wind